Chevron Shareholders Greeted by Protestors Out (and In)side Annual Meeting 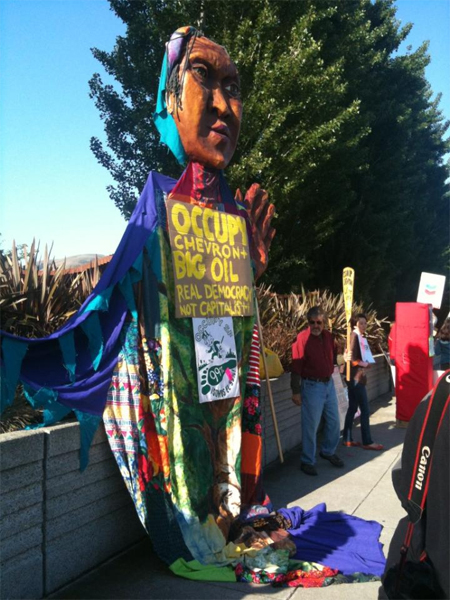 Community members from around the world who have suffered from the impacts of Chevron’s actions gathered today outside Chevron’s headquarters in support of human rights, environmental, economic and climate justice. Global Exchange Director of Organizing Kirsten Moller was there:
—
On May 30th, people gathered from around the world to descend on San Ramon, CA and confront Chevron at its annual shareholder meeting.

The protest space in front of Chevron has gotten smaller in the past two years—the wide open green lawn has been replaced by spiky succulents in bark dust and a new fence sweeps around the landscape to tastefully keep the protesters confined to the sidewalk.

That didn’t stop the spirited annual gathering of representatives from affected communities in Brazil, Nigeria, Angola, Ecuador and Richmond, California who came to let the shareholders know that their investments were in danger.

Global Exchange arrived with a pile of signs in the shape of brooms and barrels of oil calling on Chevron to clean up their messes wherever they make them  — oil spills in Brazil, toxic dumping in Ecuador and flaring in Africa – the list goes on and on.  Kate McLain (pictured below) was among the group of protestors. She recently returned from a  Global Exchange Reality Tours trip to Ecuador all fired up and ready to carry the message “Clean Up Chevron.” Meanwhile The  Brass Liberation Orchestra led us all in fierce chants of  “Chevron should pay up;  Chevron should clean up”  while a huge puppet welcomed shareholders to their meeting. 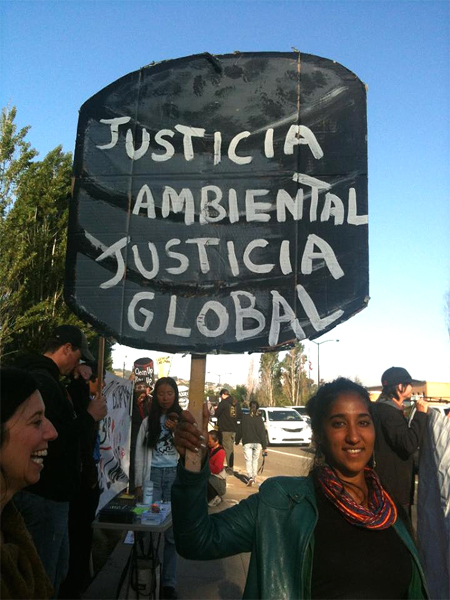 Inside representatives submitted more than 7 resolutions calling for more transparency and accountability.  Not all of the representatives were allowed inside, despite having valid proxies from shareholders.  Joao Antonio de Moraes of the Brazilian Federation of Oil Workers was one of them.

He had told us during a teach-in the night before that accidents can be avoided if worker’s rights to a safe environment are respected. Workers are on the front-line, and workers and environmentalists have a lot in common.

The teamsters and the steelworkers were there to second that idea!  Pitting workers against community members and jobs vs. the environment has been a key strategy of Chevron. We were there to say no more. 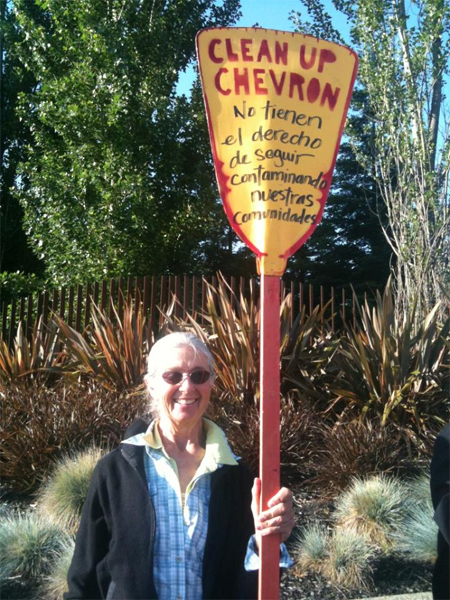 While we waited outside, Richmond community members talked about asthma, cancer, and how children are bribed with pencils and field trips to think that a company town is a good thing.  But members from the APEN, CBE and Progressive Richmond Alliance agreed on this message to the members inside:  “Shareholders, when you choose profit over the people in the communities, you will lose!”

While Richmond has succeeded in preventing any legal permits for refinery expansion and Ecuador has won an unprecedented $18 billion dollar settlement against Chevron, Chevron continues to act like a fugitive, running from its legal responsibilities. The Ecuadorian courts have upheld the judgment against the company and now the plaintiffs are poised to seize Chevron’s assets anywhere in the world.

The network gathered outside the headquarters were clear that we will not stop making connections and working together until Chevron pays for the damage it has caused.