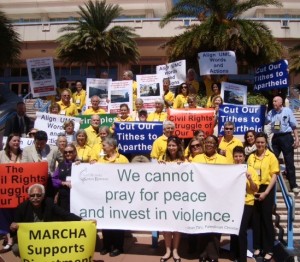 The United Methodist Church (UMC) took bold strides at the General Conference earlier this month to end the Israeli occupation and support justice in Palestine.

Led by human rights activists within the UMC and supported by the US Campaign to End the Israeli Occupation, a resolution was passed calling for an explicit boycott of all Israeli companies “operating in the occupied Palestinian territories.”

This resolution, voted on by 1,000 delegates from around the world, is a major step forward in recognizing the rights and dignity of Palestinians, and also sets the stage for other faith groups standing in solidarity to end the Occupation.

It is difficult to see this groundbreaking resolution as a complete victory, though. The General Conference fell short and voted against divestment from Caterpillar, Motorola Solutions, and Hewlett-Packard (HP) — three companies that are actively complicit in the Israeli occupation and in serious violation of international law. 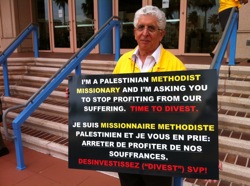 Despite falling short of full support for divestment, pressure continues to mount on these three companies through the “We Divest” campaign urging financial giant TIAA-CREF to divest from companies involved in the Israeli occupation. Not only that, the Presbyterian Church in the US will be meeting this summer to consider resolutions on boycotting settlement products, and divesting from Caterpillar, Motorola, and HP. Endorse here.

The UMC resolution was supported by grassroots activism in the Church working together with other BDS activists from around the world, including Jewish human rights activists. The struggle to end the Israeli apartheid continues, and BDS activism continues to raise awareness and organize advocacy campaigns to bring this issue to the fore.

As pointed out in the BDS Movement’s statement:

“The road to ultimate victory over oppression, as Mandela and Martin Luther King, Jr. teach us, is never straight or paved with flowers; every turn and decline are opportunities to learn how to persevere and to rise stronger against the challenges ahead.”

THIS JUST IN:
Our friends at the US Campaign to End the Israeli Occupation has reported that the Quaker Friends Fiduciary Corporation (FFC), which holds over $900 million in assets, has decided to divest from Caterpillar.

The FCC will be divesting $900,000 in Caterpillar shares. Caterpillar is responsible for building and selling bulldozers to the Israeli army, which are weaponized and used in the systematic demolition of Palestinian homes, schools, hospitals, and lives.

Join the US Campaign in thanking the FFC for their monumental decision.