The Government’s Warning to Bradley Manning and Others: “Tell on us, and we will put you behind bars for the rest of your life” 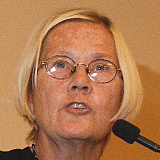 —
The Government’s Warning to Bradley Manning and Others: “Tell on us, and we will put you behind bars for the rest of your life”

The pre-trial hearings for alleged Wikileaks whistleblower US Army PFC Bradley Manning hold some lessons for us all.

One of the issues discussed in Manning’s April 25 pre-trial hearing has relevance for all of us. If soldiers or other government employees expose on the internet or in interviews with journalists government malfeasance, should that person be charged with “aiding and abetting the enemy?” Even if a soldier has no intent to give information to an “enemy,” no “evil intent,” but the enemy could possibly have access to the interview by buying a newspaper that contains the interview, or accesses it on the internet, should the government employee be prosecuted for “aiding and abetting the enemy?”

What if the government is more fearful of its citizens than of al Qaeda and the Taliban and attempts to silence the whistleblowers in the government who alert the citizens of the wrongdoings of its government?

What if the government does not want to hold accountable those in government who are violating regulations and laws?

The prosecution in the Bradley Manning trial is arguing that soldiers should know that the “enemy” uses the internet and can easily find derogatory or negative comments from military personnel and use them to find weaknesses in military units, strategies, policies.

Does that mean that a soldier, government employee, or for that matter, anyone not even in government who talks about the monstrously high levels of post-traumatic stress in our military or talks about 18 military and veterans committing suicide a day, or anyone who identifies cost overruns in virtually every government program is subject to the charge of “aiding and abetting the enemy.”

I recently inadvertently and fortuitously ended up at a meeting with a US State Department sponsored group of young professionals from the Middle East who were brought to the United States to learn more about our country. I mentioned that I was attending the hearings for the alleged Wikileaks whistleblower Bradley Manning.

The reaction of the group was stunning. Immediately hands for questions went up—the questions began with a comment—“Without Wikileaks, I would never have learned what my own governments was doing, its complicity in secret prisons and torture, in extraordinary rendition, in cooperation in the US wars in the region. Wikileaks exposed what our politicians and elected officials are doing. Without Wikileaks, we would never have known!”

And that is what Bradley Manning’s trial is all about and what the charges against six other government employees who face espionage allegations for providing information the government classified to protect its own wrongdoings -to silence other potential government whistleblowers.

Only two persons in our government have had the courage to risk life imprisonment to leak massive amounts of government documents. Daniel Ellsberg leaked thousands of documents that revealed the sordid history of the US involvement in Vietnam and who President Nixon labeled for his actions “the most dangerous man in America.”

And now, Bradley Manning who is accused of leaking hundreds of thousands of documents that reveal war crimes in the US wars in Afghanistan and Iraq and questionable US diplomatic policies and duplicity with governments around the world.

The charges of “aiding and abetting the enemy” and of espionage are meant to threaten any others who might find the evidence of government criminal actions and alert the American public.

The unmistakable warning is “don’t tell on us, or we will put you behind bars for the rest of your life.”

About the Blogger: Global Exchange board member Ann Wright is a retired US Army Colonel who spent 29 years in the US Army and Army Reserves. She resigned from the State Department on March 19, 2003 in protest of the invasion of Iraq. Since then, she has been writing and speaking out for peace. Ann has been on delegations to Iran, was in Gaza three times in 2009, and was an organizer for the Gaza Freedom March. She was on the 2010 Gaza flotilla that was attacked by the Israeli military and on the Audacity of Hope boat which was part of the Freedom Flotilla in 2011. She lives in Honolulu. 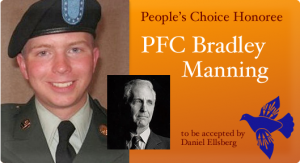 Find out all about this exciting awards event here and purchase tickets here.