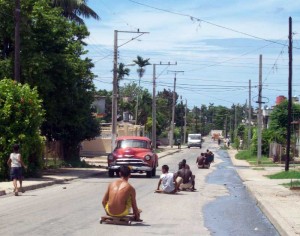 Many of our  Reality Tours Cuba  alumni will remember Karen McCartney. Karen lived in Cuba for years and regularly facilitated Global Exchange groups. Today Karen shares one of her memories about Cuban chivichanas while leading a Reality Tour trip we used to call “Following Che’s Footsteps”.

Elizardo, the ICAP represententative takes the microphone from our driver and turns to face our tour participants:

“Where we are going today is historic, for it was here, in the heart of the Sierra Maestra mountains, that President Fidel Castro, his brother Raúl, Che Guevara and their band of guerrilla fighters waged the battle that brought down the dictatorship of Fulgencia Batista and ushered in the Revolution. That was back in 1959. It took them three years to succeed and we are going to take this opportunity to retrace their steps. We’ll go into the mountains and see their headquarters for ourselves.“ 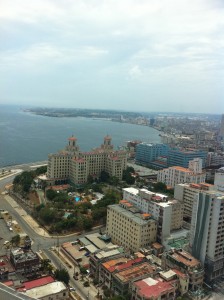 Looking out at the Hotel Nacional, Havana

Just then our driver, Juancito, calls Elizardo over to him. They confer for a minute or so. From the concerned looks on their faces it is apparent that something is wrong. They beckon to me and Diana. It turns out that our coach is an older model and Juancito is doubtful about its ability to climb the hills that lie between us and our hotel in the tiny mountain village of Santo Domingo. We stop at the base of the steepest hill I have ever seen. Someone a few seats behind me mutters that the gradient would be illegal in the United States.

“What we really need is a fifth gear for the ascent and hydraulic brakes for the descent. Our coach has neither,” whispers Juancito.

“So what do you recommend?”

He looks up at me apologetically.

We agree to let Juancito drive on at his own pace and for us to follow on foot. It will take a couple of hours longer but it’s safe. The students are elated at the prospect of getting out of their seats and eagerly rush toward the exit. 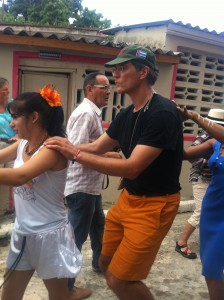 Joining in the Dance at Love and Hope, Pinar del Rio

All twenty-five of us set off, walking on occasions at an angle of what must be about 65º to the perpendicular tilt of the road. The landscape is undoubtedly the most magnificent that I’ve seen so far in Cuba. Lush vegetation springs from sheer drops, and abrupt upward sweeps arrest the gaze and guide it skyward into the clouds. The sky is shrunk, framed by verdant peaks. I too am shrunk, made delightfully small, humbled by the power of these mountains. I remind myself that I am in the east of Cuba, somewhere between the Caribbean and the Gulf of Mexico, surrounded by topography which has not changed in millennia. All of us are quiet now, content to pay homage to the moment, knowing that it will never come again. Around us there is birdsong, insistent calls produced by exotic creatures I cannot see and cannot name.

An ugly clattering, suggestive of metal colliding with concrete, intrudes on my reverie. It is getting louder, faster, and it’s coming toward us. From around the bend – at speed – comes a chivichana, a guider steered by an elderly campesino, his face frozen into a grimace. G-force, or perhaps the immensity of effort required to keep his vehicle under control at such speed? It’s not clear. Both hands are on the reins, pulling hard now, and his heels slam against the front wheels, jamming them to a halt a few metres away. Mules and home-made guiders are the most common forms of transport in the Sierra. The students are already gathering around enthusiastically. I stay back, content to watch and let the encounter develop under its own dynamics. A few words are exchanged in broken Spanish between the wizened, bright-eyed sprightly driver and his admirers.

“Qué lindo. What a beautiful guider. Did you make it yourself? What speed do you go? Is it dangerous?” 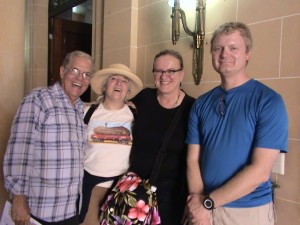 “Would you mind if we take a few photos?

Photos taken, the students give the old man the thumbs up and he manoeuvres his chivichana into position to continue its downward journey. Just as he is about to lift his heels from the front wheels one of the group calls out to him,

We turn our heads to see Jeremy, one of the quieter boys, hoist a bottle of Havana Club rum on high,

And then he tosses it with a long slow motion to the old man who catches the bottle in a single deft sweep of the hand. Only a talented baseball player would have been capable of such elegance, and the group applauds. Then he is gone in a flash, followed by a rapidly retreating commotion that can be heard echoing through the mountains for a minute or two after we have lost sight of him. We see more chivichanas over the next few days; sometimes they are little more than a blur as the locals power down these slopes at breakneck speed on this most unique form of transport. 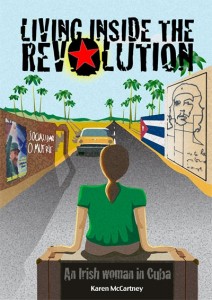 Living Inside the Revolution, An Irish Woman in Cuba. Book by Karen McCartney

To see more of Karen’s impressions please see  her blog. If you want to create a memory of your own,  learn more about the US Embargo against Cuba, or explore Cuban culture and history join us on a Reality Tour today.