Portraits of Grief in Afghanistan — What’s in a Name?

A death with no name. A death that extinguishes who you were along with who you are. A death that holds you before the world as a testament only to death itself. …..you will lose your name. You will lose your past, the record of your loves and fear, triumphs and failures, an all the small things in between. Those who look upon you will see only death. (From “To Die in Mexico by John Gibler, a book about victims of the drug War in Mexico.) 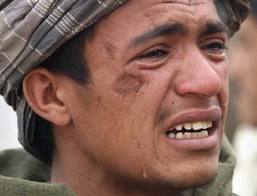 In 2002, inspired by the NYTimes portraits of individuals killed in the World Trade Center disaster, Global Exchange published a report called “Afghan Portraits of Grief,” which profiled the innocent victims of war, to expand the picture of the cost of our response to 9/11. Making the people’s stories come alive was so important to understanding the complexities and the suffering of war.

For the past two weeks as we’ve grappled with the horror of the massacre in the Kandahar province, I’ve been dismayed at the focus of the mainstream press. The press seems to be focusing almost entirely on the mind-set of Sergeant Bales and the effect of the massacre on US/Afghan relations without much mention of the actual victims who were all Afghan citizens, including nine children.

I set out to do a short piece about who the victims were — names, ages and any other details to humanize them so that we can feel and understand the real tragedy of this war…

AND I COULDN’T FIND ANYTHING! 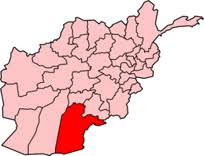 We know that three homes were attacked in the villages of Balandi and Alkozai, which is in the Panjway District of Kandahar, 35 km west of the city of Kandahar. Rolling those names around on my tongue, though I’ve never been there I wondered what it looks like and who the people are who live there.

It’s an area in the southern part of Afghanistan, steep mountain views, but a mild climate where farmers are famous for their delicious grapes and pomegranates – where there is major trade in sheep’s wool, cotton, silk and dried fruit. They grow wheat and mulberries for silk worms, serve dried fruit and tea to their guests.

One Kandahar massacre victim was Abdul Samad*, a 60 year old farmer and village elder with a long white beard and turban. He and his teenage son had been visiting a nearby town when Sergeant Bales, disguised in local clothing – a Shalwar Kameez – climbed the fence at the base wearing night vision goggles, walked about 1 mile, and went house by house looking for an unlocked door.

Mr Samad’s family had recently returned to the area after fleeing during The Surge when his home had been destroyed. He moved into a neighbor’s house near the US army base because he thought it would be safer.

Further down the road in the village of Najiban, Mohammad Dawoud, age 55 was killed. His wife and children escaped.

In Alkozi, at the home of 45 year old laborer Hajii Sayed, who had fled Kandahar three times during the years of fighting, four more people were killed: Alkozi’s wife, nephew, grandson and brother.

In total, sixteen people were killed, including nine children, four men, and three women. Five others were injured.

And for two weeks, I couldn’t even find their names! That is, until just as I got ready to post this, I find the names on Al Jazeera in a wonderful blog piece by Quais Azimy, “No one asked their names.”

Why did it take so long for the press to release the names of the victims? Until we can relate to the people hurt by our military we will continue to have innocent victims of war.

Mr. Samad who lost nine members of his family said the lesson was clear to him: “The Americans should leave.” 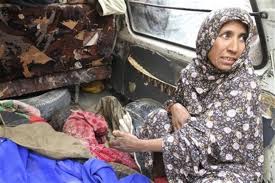 So *here are the names of the victims of the Kandahar massacre – with dignity and respect for lives cut too short:

*It is interesting that the one name I got from the New York Times. Abdul Samad is not here and instead is listed as Mohamed Wazir.