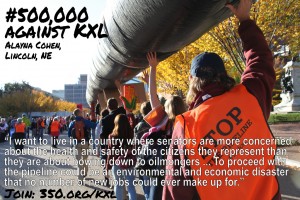 Friends, the response was rapid, fierce and overwhelming. When we joined the effort to gather 500,000 signatures in 24 hours, it seemed ambitious. With news that the Senate was considering legislation that would resurrect the Keystone XL tar sands pipeline. The same pipeline that President Obama sanely rejected last month, a group of organizations, coordinated by 350.org pulled out all the stops to pull together the biggest social media action the climate movement has mobilized.

By late Monday afternoon the 500,000 goal had been reached with Alayna Cohen from Lincoln, NE tipping the scales. But it didn’t stop. The official count was 802,180!

After a Monday night appearance on The Cobert Report, Bill McKibben said,

“The last 24 hours were the most concentrated blitz of environmental organizing since the start of the digital age. Over 800,000 Americans made it clear that Keystone XL is the environmental litmus test for Senators and every other politician in the country. It’s the one issue where people have come out in large numbers to put their bodies on the line, and online too: the largest civil disobedience action on any issue in 30 years, and now the most 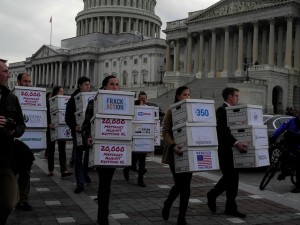 concentrated burst of environmental advocacy perhaps since the battles over flooding the Grand Canyon back in the glory days.”

On Tuesday, representatives from the coalition delivered the 800,000 messages directly to Senator Reid and Senator McConnell in DC. We’ll see what happens next. For today, we’ve spoken. Thanks for taking action!