This Just In: 6 US Citizens Arrested in Bahrain 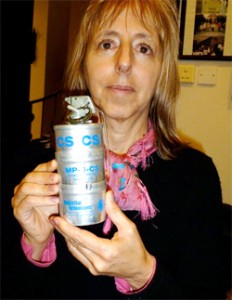 Yesterday we shared with you a report by Medea Benjamin, Co-founder of Global Exchange and Code Pink, who is in Bahrain right now. Today, 6 US citizens were arrested in Bahrain. Here’s  Medea’s latest message:

I write to you from the front lines of the violence rocking Bahrain. Today six US citizens– including CODEPINK’s very own Paki Wieland– were arrested by Bahraini security forces in Manama during a peaceful protest on the way to the Pearl Roundabout. Protesters had marched into the city center to reestablish a presence of nonviolent, peaceful protest on the one year anniversary of the Arab Spring uprising in Bahrain.

February 14 isn’t Valentines Day in Bahrain. It’s the one year anniversary of the people rising up to demand freedom – an effort brutally crushed by their government and Saudi tanks. This year, they are commemorating February 14 with massive demonstrations, and I am in Bahrain today for the demonstrations with an observer delegation.

Asked by courageous Bahraini human rights activists to come bear witness, what could we say but yes? What a great way to spend Valentines Day, showing our love for activists who put their lives on the line for freedom. Unfortunately, many on the delegation were not allowed into Bahrain, and since we arrived in the country two days ago, we have been incessantly teargassed along with thousands of Bahrainis, with teargas made in the USA. It is shameful to know that my government continues to sell weapons to this repressive regime.

Show your love for the brave Bahraini protesters by signing this petition calling on President Obama to stop new arms deals with Bahrain. Support the people in the street fighting for their rights, from Egypt to Bahrain and Oakland to Washington DC!

Paki, now in custody, holds a canister of Made in USA tear gas in Bahrain

Here’s more about the US citizens arrested in Bahrain today, from our friends at Voices for Creative Nonviolence:

The international observers were in Bahrain as part of Witness Bahrain, an effort aimed at providing civilian presence to report and monitor the situation on the ground. Leading up to February 14, the one year anniversary of pro-democracy protests, Bahraini authorities had prevented journalists, human rights observers and other internationals from entering the country, leading many to fear a brutal crackdown.

Just yesterday, Secretary of State spokesperson Victoria Nuland stated that the US wanted to see the “security forces exercise restraint and operate within the rule of law and international judicial standards.” But she failed to condemn the violent arrests of US international observers, the detainment of numerous Bahraini pro-democracy activists (including President of the Bahraini Center for Human Rights, Nabeel Rajab) and the ongoing use of overwhelming amounts of tear gas.

The six US citizens were part of a peaceful protest marching towards the Pearl Roundabout – site of last year’s peaceful round-the-clock protest in Bahrain, modeled after Egypt’s Tahrir Square – when they were attacked. Bahraini authorities appear to have targeted the Witness Bahrain observers, as one volunteer was told that she was detained for reporting on the February 11th Manama protest.

The six observers remain in Bahraini custody in the Naem Police Station in Manama. This group of internationals is the second to be deported by the Bahraini government. Attorneys Huwaida Arraf and Radhika Sainath were deported on Saturday, February 11th. The two were handcuffed for the duration of their flight from Bahrain to London.

Take Action! Once again, sign this petition calling on President Obama to stop new arms deals with Bahrain. Support the people in the street fighting for their rights, from Egypt to Bahrain and Oakland to Washington DC! 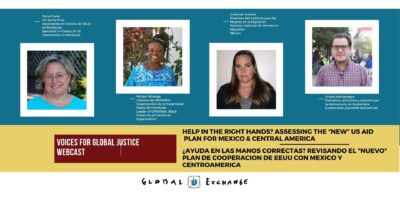 Help in the Right Hands? Assessing the “New” US Aid plan for Mexico and Central America