24 Hours to Stop the Pipeline (Again!) 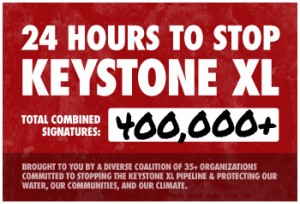 It seems unbelievable, but right now, the Senate is considering legislation that would resurrect the Keystone XL tar sands pipeline. The same pipeline that President Obama sanely rejected last month.

We need to act fast. Please act immediately and send a message to Congress, urging our elected representatives to block any efforts to revive the tar sands pipeline and reject the pressure that Big Oil lobbyists are applying. A deal might be coming together in the next 24 hours.

We’re part of the massive effort to send over 500,000 messages to Congress in under 24 hours. The time to send your message is now.

Bill McKibben, 350.org founder had this to say:

“Anyone who thought environmentalists were graying into irrelevance was wrong…If we can keep this momentum up for another 18 hours we’ll have our half million signatures, and we’ll have proof that Americans who are paying attention want the president’s courage backed up by the Congress.“

Once you’ve signed and made your voice heard, check out this photo-documentary just completed by Ben Powless. Make sure to scroll over the ‘READ’ graphic to hear stories from those fighting for justice.