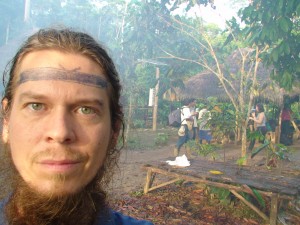 Paul Prew in the Sarayaku, Ecuador 2007

Reality Tours started offering delegations to Ecuador in the spring of 2002. Now we are celebrating ten years of  rich, educational programming that examines pressing social and ecological issues affecting Ecuadorians from the Andes to the Amazon. While there are many special aspects of our program in this culturally and biodiverse nation, it is the indigenous struggles to protect their cultures, ecosystems and Pachamama in the face of major petroleum and mining corporate interests that lay at the foundation behind each eco-tour. As I prepare for my fourth trip to the Ecuadorean Amazon, I feel honored to engage and learn once again from the wisdom, experiences and successes of  communities like the Sarayaku. To know that our journeys keep their promise to inform and inspire make all our hard work in San Francisco and in Quito worthwhile! Just read the insights of past participant Paul Prew: 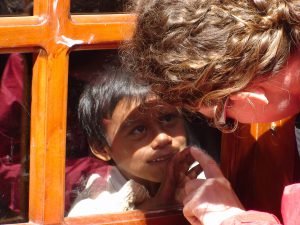 Heather with Child in Salinas, Ecuador, 2007

The issue I have discussed often in my classes is the effects of oil exploration in Ecuador.  While on the Global Exchange tour, we visited Coca and participated in a “toxic tour” of the region.  As soon as we exited the plane, the smell of fuel oil was immediately present.  Our tour took us through towns with pipelines transecting them.  We visited a waste oil pit where oil was collected in a large pond with no lining to prevent it from seeping into the groundwater and surrounding ecosystem.  We also visited a waste oil pond that was cleaned up, but oil remained in the soil and in the shallow pond that replaced the waste oil pit.  We also stumbled upon workers fixing an underground pipeline that had been leaking.  As a result of the leak, we were able to film a home that was destroyed by an explosion resulting from built up gas.
Not all of the experiences regarding oil exploration focused on the problems people faced.  We also visited the indigenous community of Sarayaku where we saw people actively preventing environmental degradation.  In Sarayaku, the community members have successfully prevented oil companies from initiating oil exploration in their territory.  The Sarayaku have been able to attain this level of success through a number initiatives that have reorganized their society and reached out to the global community for support.  We learned about the changes in their governance structures, education, and environmental policies.  Their local model provides examples for other communities to follow.

I think the lessons learned in the community of Sarayaku resonate with me the most.  In the United States, our privileges are dependent on resources we take from others around the world.  We tend to lack an awareness of our ecological boundaries.  The Sarayaku are acutely aware of their ecological relationships and attempt to proactively mediate their relationship with the surrounding environment.  While they have made many changes, one issue stands out.  Because of contamination and over-fishing outside of their territory, the Sarayaku have had to deal with declining fish populations.  To help supplement their fish catch, the Sarayaku, in conjunction with resource ecologists, have developed fish farms.  These fish farms are sustainable using plantain and termites for fish feed.  Because these fish farms were not a traditional means of meeting their needs, I asked the Sarayaku elder, Don Sabino Gualinga, how these fish farms fit with their notion of “balance.”  He replied that they must deal with the concentration of people, and there is hope that they will return to an equilibrium in the future. Now, they have other areas (nature preserves) where there is balance.  In this way, the Sarayaku are actively thinking about their relationship with nature and assessing how they can maintain their culture and also maintain their livelihood in the rainforest.  These ideas allow me to help students contemplate their own society and its relationship with nature. 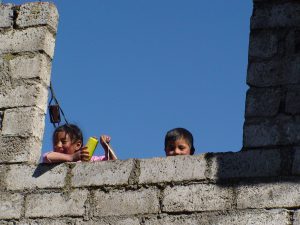 The theme of struggle and success resonated throughout the tour.  We visited cooperatives in the mountain town of Salinas and also the community of Yungilla.  We heard from farmers fighting a mining company near the town of Intag.  We met with organizations such as Accion Ecologica where we learned about Plan Columbia and its effects on the local population.  After discussing these issues in one of my classes, a student talked with me after class.  She was stationed in the military base in Ecuador near area where Plan Columbia was implemented.  She began by telling me that the local population was not very friendly to her or the other US troops.  Knowing that this was the result of Plan Columbia, I asked her about how friendly people were when she visited other areas of Ecuador.  She admitted that her experiences outside of the military base area were very pleasant, and people were very friendly.  Because of the Global Exchange tour, I was able to help this student see that the people of Ecuador were not antagonistic toward “gringos” but were justifiably upset about the policies of the US government that affected their lives.  We were able to discuss this distinction and make it a learning experience.

The Global Exchange tour in Ecuador was a life changing experience.  I hope to join another tour in the future.  I am still amazed at the depth of the experience and how profoundly it has impacted my life and those who shared in the tour.

Take Action! For those of you that would  like to learn more and get involved: