Happy almost February everybody. Here’s your monthly dose of Fair Trade news and updates, assembled just for you hungry readers. Don’t forget to scroll to the end of this post for the “Fair Trade in the News” section! 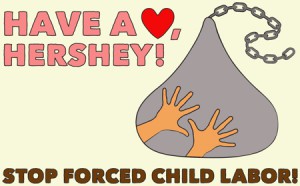 THIS VALENTINES DAY, TELL HERSHEY TO HAVE A HEART

Almost all major chocolate companies have begun to commit to using independent, third-party programs to certify that their cocoa suppliers comply with international labor standards, but Hershey continues to lag behind the industry.

Valentine’s Day is a major chocolate buying holiday, but gifts for your sweetheart should not come at the expense of worker rights. Forced labor, child labor and trafficking continue in the cocoa industry in West Africa.

Here’s how YOU can make a difference!

♥ Create your own personalized Valentine telling Hershey to use Fair Trade cocoa for its products, like the iconic chocolate Kiss. Address your valentine to Hershey Trust at 100 Crystal A Drive, Hershey, PA 17033. Please mail your Valentines to Hershey by February 17, 2012.

♥ You can also download a Valentine to color and send.

♥ If you make your own Valentine, please scan it and send the image to the Fair Trade Project at fairtrade@globalexchange.org. We’ll post some of the favorites online! 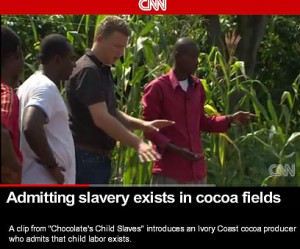 In “Chocolate’s Child Slaves,” CNN’s David McKenzie travels into the heart of the Ivory Coast to investigate children working in the cocoa fields.

The Freedom Project wanted our team to answer one question: Ten years after all the major players in the chocolate industry promised to end trafficking and child labor in Ivory Coast, was that promise kept?

Here’s a video clip from this project: 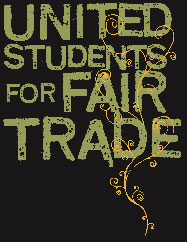 United Students for Fair Trade (USFT) has its 9th national convergence coming up. This year the theme is Fair Trade: Where Do We Go From Here? Here’s the where, when, what and why’s about it, from the USFT announcement:

Kick off your spring with more than just a spring-cleaning –join United Students for Fair Trade for our 9th National Convergence, coming up on March 2nd-4th at the University of Maryland at College Park. USFT is proud to open our annual convergence to both students and professionals to learn more about the exciting future of the fair trade movement. Register by February 1, and receive an official USFT Alta Gracia (union-made, living wage apparel) t-shirt. Registration is limited to the first 300 participants—and spots are filling quickly! Registration closes February 17th.

The theme “Where Do We Go From Here?” will cover all questions that have come up during this pivotal time in the fair trade movement with speakers representing the worker, NGO and company voices behind the movement.  There will be workshops and discussion sessions, along with the chance to browse a Fair Trade marketplace and stock up on fair trade goods. At this convergence, you will learn skills that will help you organize a movement on campus, inspire others, and empower fair trade producers all at the same time!

WEBINAR: “SHOULD UNORGANIZED FARMERS BE INCLUDED IN FAIR TRADE?“

From Fair Trade Resource Network announcement:
We invite you to learn about, and voice your perspectives on, this major issue on Webinar 120 on January 31 entitled “Should Unorganized Farmers Be Included in Fair Trade?” 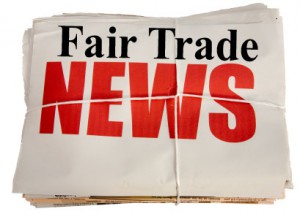 FAIR TRADE IN THE NEWS…

The Hershey Company today announced its plan to reinforce cocoa sustainability efforts by accelerating farmer and family development in West Africa, where 70 percent of the world’s cocoa is grown. Read more.

Reports about the inhumane or dangerous working conditions in Chinese factories that manufacture the innovative products for Apple, Inc. — most recently by the New York Times — have brought publicity Apple probably does not want. For this student of China’s high-tech industry, however, the revelations are not surprising. Read more.

Care2.com: How Ethical are Those Valentine’s Day Treats?

Can you believe that Valentine’s Day is right around the corner? It feels like we just got done with holiday craziness! If you do the Valentine’s Day thing, you’re probably planning a date night or a gift, and there’s most likely a decadent dessert in the works. How can an ethical eater make sure that those Valentine’s Day indulgences aren’t at the expense of human rights? Read more.

How do mission-driven businesses integrate principles and design? For members of the Fair Trade Federation (FTF), a commitment to the nine Principles of Fair Trade not only provides the ethical foundation for their business practices, but inspires the design of products as well. Fair Trade Federation members are businesses based in the U.S. or Canada who engage in long-term trading relationships with artisans and farmers in developing countries. Their business models create sustainable, positive change by: Read more.

TIME/Techland: Will the World Ever See Fair Trade iPads?

Apple has taken the brunt of recent criticism, but don’t think that by boycotting the iPhone you’ll be doing workers in China any favors. Foxconn, the company under the most scrutiny for its labor practices, makes products for a huge swath of the consumer electronics industry including Nokia, Samsung and many others. Read more.

The annual report was prepared by the Offices of Senator Tom Harkin, Representative Eliot Engel, The United States Department of Labor, The Government of Cote d’Ivoire, The Ghana Ministry on Employment and Social Welfare, and the International Chocolate and Cocoa Industry. See highlights and view photos from the CLCCG annual meeting, held in Washington, D.C. in January 2012. Read more.