The Best Government the 1% Can Buy: Is Reversing Citizens United or Corporate Personhood Enough? 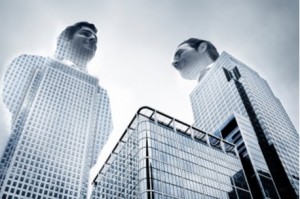 If you recognize this Presidential quote, it probably means you’re a history buff (or you watch too much Jeopardy). The correct answer: Who was Theodore Roosevelt?

While the speech has become a notable quotable, it’s often forgotten that it followed public outrage surrounding Roosevelt’s acceptance of huge corporate contributions that locked-in his election in 1904.  This popular clamor for accountability (the Progressive Era; maybe they were the Occupiers of their times) was enough to move Teddy and Congress to pass the first ever Federal legislation prohibiting corporations from making monetary contributions to national political campaigns, called the Tillman Act.

Now for extra points: What happened to the Tillman Act?

Like so many other attempts over the last 100+ years to restrict, reform, reign in, eliminate and otherwise account for Big Money in politics, the Tillman Act didn’t even need to be overturned for the corporate elite to get around it. It was simply whittled away. How is this done?  In the same way Congress later banned unions from making political contributions in the 1940’s, only to see Big Labor skirt the restrictions by forming the first-ever PAC, and collecting campaign donations (sometimes coercively) outside of regular worker’s dues. 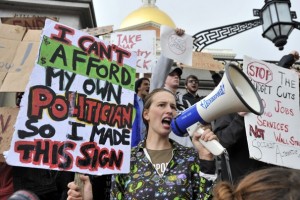 OK, now for a Civics question: What is the source of power for the corporate elite?

Throughout our history as a nation, the wealthy elite have always held power, and its not an accident, or the result of a few bad decisions, or even corruption (though those all exist), its far more structural and insidious than that.  The Constitution itself provided—from the beginning—for a government by and for the 1%. The Founding Fathers truly believed that the best form of government was one in which wealth made the rules. At the time the Constitution was being debated, the majority of people were against it, despite how our folklore has remembered it.

Turns out the 99% of yesteryear were quite prescient indeed. 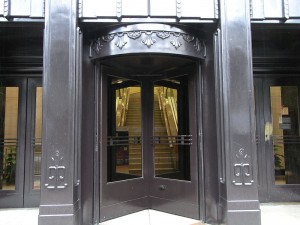 The REVOLVING DOOR: Center for Responsive Politics found 370 former members of Congress were in the "influence-peddling business", becoming lobbyists or corporate advisors.

Fast-forward to the present day, the ways money has seeped through the cracks of our political system and pooled into the pockets of our elected officials has only grown despite generations upon generations of ever-ongoing reform efforts.

* Dozens of Acts of Congress have been passed attempting to address corruption in government and our elections yet for every reform our system has enabled bigger, better ways for wealth to hold the reigns.

* Lobbyists. They walk right into lawmaking areas and help write bills and buy votes. They present politicians with corporate-friendly Bills already drafted. They are well paid to successfully influence, chop and change legislation, and work deals with our elected officials and even with Supreme Court Justices. Under our Constitution this is protected as free speech and despite the numerous laws to regulate lobbyists, the practice is only on the rise.

*  Constitutional laws.  Many states—not only Montana— wrote their Constitutions to include the subordination of corporations to the will of the people, and banned corporate political expenditures in state elections.  Over the years, most of those Constitutional provisions have been amended to pave the way for more corporate-friendly laws. (Montana, of course still has this language in their Constitution, and has used it to challenge Citizen’s United)

*  The Supreme Court. We ended the plantation system and slavery with the passage of the 14th and 15th Amendments.  Yet it was the unelected lifers of the USSC that added corporate monsterhood to the 14th Amendment, providing the new vehicle for wealth to continue to rule after slavery was abolished. They also made sure that our labor and environmental laws are placed under the Commerce Clause, so that our worker and environmental laws have the seal of approval from business.

(Fun fact: did you know that the Constitution didn’t specify how many Justices there could be? It could have been just one!). Find out more here.

* The Commerce Clause – it looks so benign in the Constitution—15 little words that empowers Congress to regulate commerce—but it is one of the most powerful weapons in corporate arsenal. Anything defined as commerce (and everything is defined as commerce, including toxic waste) has been used by corporations and the courts to strip state and municipal governments of lawmaking designed to protect communities and ecosystems from harm. It has been exported around the world to do the same  (see NAFTA). Its powers have quietly grown over the last 100 years. For a great history of the Clause, click here (pages 18-37).

The list goes on and on. But the point is, there isn’t just ONE tool, or two, or even three. The system is designed to be an underground burrow for a never-ending game of Corporate-Whack-A-Mole. You know, the arcade game where you take a big mallet and smack the “mole” when it pops up from its hidey-hole…only to find that once you whack it down, it comes up in another place, faster and faster until you can’t keep up? We can’t stop the moles from popping up; it’s the function of the game. 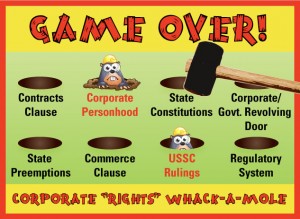 The point is, if we think the system is broken,  then we could fix it, we could reform it. We could ask our elected leaders to work with us to amend or otherwise throw in some new rules to work out the bugs, and strike down laws that are inconsistent with a functioning democracy.  That makes sense—if it’s merely broken.

But if we find that its not broken at all—but rather working perfectly as the manufacturers designed it— a Constitutional structure that is designed around Property and Commerce (rather than Rights and Democracy) then the time has come to stop playing corporate whack-a-mole, and start taking a step toward something more revolutionary.

We could begin to ask new questions like: what if corporations aren’t the problem at all? Or: If the Supreme Court had never granted “personhood” rights to corporations, would they still be trammeling the rights of citizens and riding roughshod over communities and nature—Would we have democracy?

The revolution for new rules is already here. Its happening at the grassroots. 150+ communities have already begun to challenge the system by writing new laws that place community and ecosystems above corporate profits and they’ve challenged the entire structure of law—right from Main Street, where they  live. These brave communities want real democracy and government in the hands of the people, and they are not afraid to challenge unjust laws that deny their rights and place corporate harms in their midst.

Revolutionaries who fought for Independence from Britain wanted nothing so much as the right to govern themselves locally. They trusted themselves to make critical decisions at the local level on issues that directly affected them.  We could learn a lot from our real founding brothers and sisters. We could join today’s Community Rights rebels across the country, make a nationwide movement that asserts (rather than asks for) our rights.  After all, upholding the rights of the people is the real job of government and just law.

So. Final Jeopardy question:  What are we truly prepared to do to put government in the hands of the people?