Count Down to a Thumbs Down on Keystone XL (we hope!) 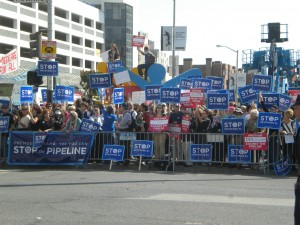 Wait a minute! Hang on! Didn’t we celebrate that Obama announced that the Keystone XL permit decision (whether or not approve TransCanada’s application to build a mega pipeline to transport dirty tar sands oil from northern Alberta to the Gulf of Mexico) was off the agenda until 2013? Yes, we did. BUT then the payroll tax cut extension came up for consideration in Congress and outraged Republicans decided to attach legislation forcing President Obama to approve or deny Keystone XL in sixty days. This happened on December 23. Happy Holidays climate change, environmental destruction and indigenous rights.

TransCanada can’t stop talking about all the jobs they want to create if Keystone XL is approved. (The Center for Economic and Policy Research‘s economist Dean Baker debunked these numbers on Jan 2.) 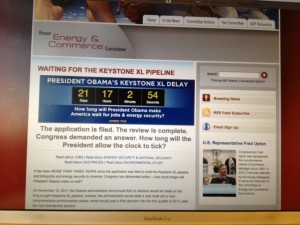 On Jan 4, Republicans on the House Energy and Commerce Committee launched a ‘countdown clock’ asking, “Will President Obama choose jobs and energy security for America?” If you are not great at math, like me, the clock is kind of handy.

Speaker John Boehner blogged on Jan 13 asking what you’d decide if you were President, and is asking for feedback: “Let Speaker Boehner know in the comments section … on Google+, on Twitter using the #KXL hash tag, and on Facebook by answering our Question here.” Take action, friends!

So, while all this is going on the count down to a thumbs down is on. Obama’s spent twenty-one days, seventeen hours and two minutes (of his sixty days) from the time this blog is posted. In December White House communications director Dan Pfeiffer tweeted that the countdown “simply shortens  the review process in a way that virtually guarantees that the pipeline will NOT be approved.” Today Business Week quoted Mike McKenna, an oil-industry lobbyist and president of MWR Strategies Inc. in Washington, saying, “The president is going to say no. The only recourse the Republicans have is to make it painful, politically, for him.” 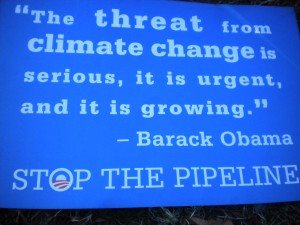 Months ago Maude Barlow recounted a conversation that she had with a taxi driver in DC on her way to participate in the days of protest to stop Keystone XL this summer. She asked the man what Obama should decide on the pipeline. He said that Obama is in a tough place, if he approves the project he’ll anger his supporters who elected him but if he denies it, he’ll anger the big corporations pressuring for approval. Maude agreed and then asked him again what he though that Obama should do. The driver responded, ‘If Obama can’t please everyone, then he should do the right thing and deny the pipeline’.

Below is a short film about tar sands extraction – beyond Keystone XL, other oil giants are working to increase extraction in other directions, from northern Alberta to the west coast through a project called the Northern Gateway. This short film was ranked as one of the Top Ten Revolutionary Videos of 2011.