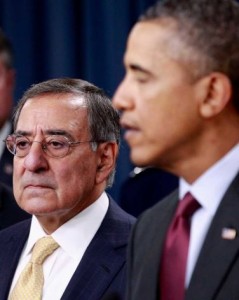 The following was written by Charles Davis and Medea Benjamin. Charles Davis has as covered Capitol Hill for public radio and the international news wire Inter Press Service. Medea Benjamin is cofounder of CODEPINK: Women for Peace and Global Exchange.

In an age when U.S. power can be projected through private mercenary armies and unmanned Predator drones, the U.S. military need no longer rely on massive, conventional ground forces to pursue its imperial agenda, a fact President Barack Obama is now acknowledging. But make no mistake: while the tactics may be changing, the U.S. taxpayer – and poor foreigners abroad – will still be saddled with overblown military budgets and militaristic policies.

Speaking January 5 alongside his Defense Secretary Leon Panetta, the president announced a shift in strategy for the American military, one that emphasizes aerial campaigns and proxy wars as opposed to “long-term nation-building with large military footprints.” This, to some pundits and politicians, is considered a tectonic shift.

Indeed, the way some on the left tell it, the strategy marks a radical departure from the imperial status quo. “Obama just repudiated the past decade of forever war policy,” gushed Rolling Stone reporter Michael Hastings, calling the new strategy a “[s]lap in the face to the generals.”

Conservative hawks, meanwhile, predictably declared that the sky is falling. “This is a lead from behind strategy for a left-behind America,” cried hyperventilating California Republican Buck McKeon, chairman the House Armed Services Committee. “This strategy ensures American decline in exchange for more failed domestic programs.” In McKeon’s world, feeding the war machine is preferable to feeding poor people.

Unfortunately, though, rather than renouncing empire and endless war, Obama’s stated strategy for the military going forward just reaffirms the U.S. commitment to both. Rather than renouncing the last decade of war, it states that the bloody and disastrous occupations of Iraq and Afghanistan – gently termed “extended operations” – were pursued “to bring stability to those countries.”

And Leon Panetta assured the American public that even with the changes, the U.S. would still be able to fight two major wars at the same time—and win. And Obama assured America’s military contractors and coffin makers that their lifeline – U.S. taxpayers’ money – would still be funneled their way in obscene bucket loads.

“Over the next 10 years, the growth in the defense budget will slow,” the president told reporters, “but the fact of the matter is this: It will still grow.” In fact, he added with a touch of pride, it “will still be larger than it was toward the end of the Bush administration,” totaling more than $700 billion a year and accounting for about half of the average American’s incometax. So much for the Pentagon’s budget being slashed – like we were promised – the way lawmakers are trying to cut those “failed domestic programs.”

The U.S. could cut its military spending in half tomorrow and still spend more than three times as much as its next nearest rival, China. That’s because China, instead of waging wars of choice around the world, prefers projecting its might by investing in its own country. On the other hand, the U.S. under the leadership of Obama is beefing up its military presence in China’s backyard, more interested in projecting its dwindling power than rebuilding its economy.

President Dwight D. Eisenhower once noted that every dollar going to the military is a dollar that can’t be used to provide food and shelter for those in need. Today’s obscene amount of military spending isn’t necessary if the administration wished to pursue the quaint goal of simply defending the country from invasion. Maintaining “the best-trained, best-equipped military in history,” as Obama says is his goal? That’s a different story – for a different purpose. Indeed, as Madeline Albright observed, possessing that kind of military might is no fun if you don’t get to use it, as Obama has with gusto in Iraq, Afghanistan, Pakistan, Yemen, Somalia, Libya and Uganda.

The truth is that the Obama administration’s “new” strategy is more of the same—a reaffirmation of the U.S. government’s commitment to militarism for the all the usual reasons: to promote American hegemony and, by extension, the interests of politically connected capital. And U.S. officials aren’t shy about that.

Indeed, throughout the strategy document the ostensible purpose for having a military — to provide national security — repeatedly takes a backseat to promoting the economic interests of the U.S. elite that profits from empire. Repositioning U.S. forces “toward the Asia-Pacific region,” for instance – including the stationing of American soldiers in that hotbed of violent extremism, Australia – is cast not just as a means of ensuring peace and stability, but guaranteeing “the free flow of commerce.” Maintaining a global empire of bases from Europe to Okinawa isn’t necessary for self-defense, but according to Obama, ensuring – with guns – “the prosperity that flows from an open and free international economic system.”

Of course, that economic considerations shape U.S. foreign policy is nothing new. More than 25 years ago, President Jimmy Carter – that Jimmy Carter – declared in a State of the Union address that U.S. military force would be employed in the Persian Gulf, not for the cause of peace, freedom and apple pie, but to ensure “the free movement of Middle East oil.” And so it goes.

Far from affecting change, Obama is ensuring continuity. “U.S. policy will emphasize Gulf security,” states his new military strategy, in order to “prevent Iran’s development of a nuclear weapon capability and counter its destabilizing policies” — as if it’s Iran that has been destabilizing the region. And as Obama publicly proclaims his support for “political and economic reform” in the Middle East, just like every other U.S. president he not-so-privately backs their oppressors from Bahrain to Yemen and signs off on the biggest weapons deal in history to that bastion of democracy, Saudi Arabia.

Obama can talk all he wants about turning the page on a decade of war and occupation, but so long as he continues to fight wars and military occupy countries on the other side of the globe, talk is all it is. The facts, sadly, are this: since taking office Obama doubled the number of troops in Afghanistan; he fought to extend the U.S. occupation in Iraq– and partially succeeded; he dramatically expanded the use of killer drones from Pakistan to Somalia; and he requested military budgets that would make George W. Bush blush. If you want to see what his military strategy really is, forget what’s said at press conferences and in turgidly written Pentagon press releases. Just look at the record.