Is the UN Promoting Environmental Apartheid? News from the Durban Climate Talks and Why You Should Care

Global Exchange’s Community Rights program director Shannon Biggs returns from the UN Climate conference in South Africa where she, along with climate justice advocates including former Bolivian Ambassador to the UN, Pablo Solon, Indigenous leader Tom Goldtooth, South Durban community activist Desmond D’sa and international colleagues from the Global Alliance for the Rights of Nature held a series of activities in Durban to advance the Rights of Nature as an alternative framework to the corporate-led agenda of the COP 17 and the global economic system now being called environmental (or climate) apartheid. 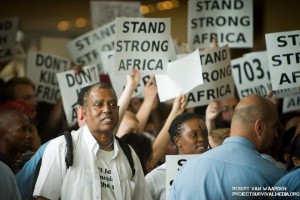 Accompanied by a cynical shrug, “Durban-shmurban,” sums up the sentiments of those who have long given up hope that the best and brightest (or the 1% and corrupted) among this league of nations could ever unite to solve the human-induced climate crisis. After all, other than vowing to drive less and become greener consumers, the grand scale and technical scope of reducing atmospheric greenhouse gasses is beyond the rest of us to solve.

For those paying attention, including thousands of NGOs who came to South Africa to play a role in preventing the worst outcomes of the COP 17 (or to protest the process itself), it’s been alliteratively billed as the “Durban Disaster,” following previous UNFCCC conferences: 2010’s “Catastrophe in Cancun” and 2009’s  “No-penhagen” in Denmark.

So why should anyone pay attention to what happened at the UN climate talks? The failure of international leaders to come to agreement in Durban South Africa sounds like business as usual, and it is—but make no mistake: officially choosing inaction now is a guaranteed death sentence for millions of people and ecosystems.  If the lesson of Durban is that climate change is the symptom, and not the problem, this may be our game-changing call to action.

On the final scheduled day of negotiations in Durban, the UNFCCC stunned even seasoned observers with a plan tantamount to genocide. Country emissions targets were dropped far below what science dictates; loopholes for the worst offenders to avoid their commitments, and most critically, most decisions were put off until 2020. 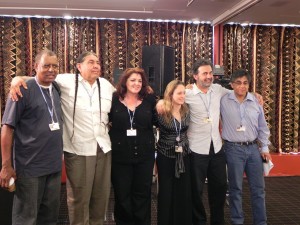 As environmental activist Nnimmo Bassey explained, “Delaying real action until 2020 is a crime of global proportions. An increase in global temperatures of 4 degrees Celsius, permitted under this plan, is a death sentence for Africa, Small Island States, and the poor and vulnerable worldwide. This summit has amplified climate apartheid, whereby the richest 1% of the world have decided that it is acceptable to sacrifice the 99%.

Apartheid is the Afrikaans word for “apartness,” and applied to the climate and ecosystems, it begins to get at what is behind the DNA-level failure of the UN’s COP process to achieve its stated goal of reducing greenhouse emissions.  Climate change is merely a byproduct of treating nature as human property (and therefore apart from us), to be destroyed at will. Our global economic system is property-based and driven by a value system of “endless more.”

As Pablo Solon stated at a press conference hosted by Global Exchange: “We can throw our garbage to the air and nothing happens. But we’re all part of one system, and the atmosphere is part of that system.   We have to respect the natural laws of this system. Because we have broken the vital cycle of carbon, its not only a matter of how big immediate reductions are, but how we change our relationship with nature.” 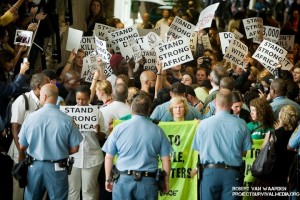 Following news of the outcome, credentialed protesters gathered and filled the halls, stairwells and lobby of the ICC (official space).  When UN Security began to remove the activists, Anne Petermann, executive director of the Global Justice Ecology Project, sat down. “If meaningful action on climate change is to happen, it will need to happen from the bottom up,” she said. “The action I took today was to remind us all of the power of taking action into our own hands. With the failure of states to provide human leadership, and the corporate capture of the United Nations process, direct action by the ninety-nine percent is the only avenue we have left.” For more, click here.

Redefining the problem is a game changer.

As long as it was accepted that climate change is the problem, it made a lot of sense to turn to international institutions like the UN as the driver for change.  This has tethered much activism to seeking concessions in a rigged game of false solutions, because the UNFCC is based not on the root causes of environmental exploitation—but ‘market fixes’ to the same corporate-led economic model and ‘endless-more’ value system that have driven us to the cliff’s edge. 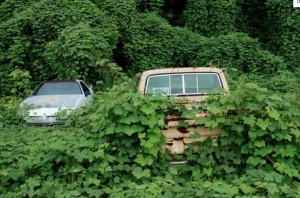 Like the slow strangulation of a creeping kudzu vine, our activism has been constrained to a smaller and smaller patch of sunlight, options and regulatory schemes that weren’t even of our design. In this sense, the utter failure of Durban can be quite freeing—if we chose it—because it means we can actually address root causes of climate change, chiefly, our cultural and legal traditions of dominating the Earth for profit.

Occupy is the other game changer. 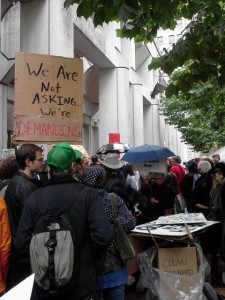 We Are Not Asking, We Are Demanding

Occupiers and revolutionaries from Egypt to Wall Street and around the world have woken up millions of the disillusioned, and inspired them to find their own voice, their own power. Once awakened, we will seize this moment and shift the system itself that places corporate interests above our shared values of justice, equality, good jobs, healthy resilient vibrant communities and ecosystems.  In Durban, Anne Petermann and others sat down to remind us that we the 99% do have the power to change the rules. We can chose another way if we believe we can.

The Rights of Nature offers a platform for action to challenge the market-based approach that dominates the UN COP process.  “Why bring RON to climate change conference?” Pablo Solon was asked,  “Because if we are going to address climate change, we must address the issue of a new relationship between humans and nature. Its not just a problem with how many particles of CO2 emissions, it’s a problem of why does this happen?”

Where do we go from here? The Good news

A new framework for global action based on the needs of people and the planet already exists. The People’s Accord and the Universal Declaration on the Rights of Mother Earth are key outcomes of the 2010 People’s Summit on Climate Change and the Rights of Mother Earth, hosted by Bolivia and led by Indigenous communities and civil society. For more on this from the perspective of Durban see CJN! media release.

Those of us working on the rights of nature framework are seeking to reconnect humanity with the rest of species. We seek to change human law that can only “see” nature as a thing — separate and apart from us, property to be owned and destroyed at will. We seek to change the law because our own salvation can only come from a cultural mindset that we are a part of nature. Such a fundamental shift will require new laws that enforce and enable those cultural values.

A People’s call to action, local national and global

While we take from nature the strength of diversity, we can remain diverse while uniting around the rules set forth by Mother Earth. We have in the past found solace strength and cohesion in broad strokes alignment with peasant farmers, landless workers, unions, Indigenous and non-indigenous communities.  That’s not going to be easy, but there is a lot of common ground.  For example, on the issue of rights of nature versus Indigenous rights, there are many different opinions among native traditions.  But there is tremendous Indigenous support for changing the dominant culture, and the fossil fuel economy that UNFCC is based on. 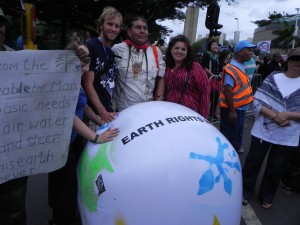 As Indigenous leader Tom Goldtooth says, “Our earth is our Mother, creator of everything, including two-legged people. Life as we know it is changing, we can no longer ignore the evidence, and it is our responsibility to be caretakers, guardians of our Mother. New economies need to be governed by the absolute carrying capacity of Mother Earth. More equitable, self-sustaining communities, with rights and respect.”

The United Nations is not going anywhere, but our messaging to the UNFCCC might change (though it is worth saying that next year’s conference has been scheduled in the zero-tolerance-for-protesting capitol of Qatar).

From Pablo Solon: “Well, if there is no pressure from civil society, there won’t be the possibility to have any kind of agreement that is in some makes a difference. If you want to change the system, there has to be a huge movement developed outside of the main structures. We must open the discussion. We have a mandate that the Rights of Nature must be part of the discussion in climate negotiations.”

At the national level, in addition to Ecuador and Bolivia who have passed laws recognizing rights of nature, as many as half a dozen countries are working with the Global Alliance on the Rights of Nature and are seriously considering rights of nature laws, and how Constitutional provisions, like Ecuador’s could be transformational and provide new ways to protect ecosystems. Some of those concersations were moved forward in Durban.  They tell us that creating a vibrant global civil society movement of campesinos, workers, unions, Indigenous and non Indigenous communities, women’s movements, peace, climate and social justice activists can support their efforts at changing laws to reflect a new relationship with the Earth. 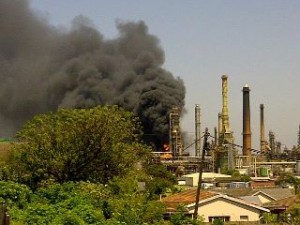 At the community level, campaigning around climate change and even climate justice is often hard. After all, we cannot feel the burden of atmosphere weighted by carbon storage or truly know where in the world accumulations of CO2 were manufactured.  But we can feel the burden of society’s inventions that leave polluted rivers, cancer clusters, poverty, and tons of carbon emissions in their wake.

From the oil refinery fence line in South Durban, the gathering of international experts offers no solutions on the ground. Desmond D’Sa lives and works in Durban South Africa, the dirtiest city in South Africa, and ironically, host city to the COP 17. There, he is the director of the South Durban Community Environmental Alliance (SDCEA), an environmental justice network. Over 300 toxic industrial plants — including two oil refineries — operate in and around the city, particularly concentrated in the neighborhoods of south Durban, an area particularly disadvantaged by the legacy of apartheid. Explosions, accidents, spills, and other toxic exposures are part of daily life there, and the reason why Desmond has begun to introduce the idea of rights for nature and residents in South Durban.

As a rights-based organizer in California, I, along with my legal and organizing partners at the Community Environmental Legal Defense Fund (CELDF) assist communities to pass groundbreaking new laws that place the rights of residents and nature above the interests of corporations.

We’ve often heard the takeaway from the COP processes in Copenhagen and Cancun is that the same corporate-led system that created climate change cannot be part of the solution. From Durban, we add that a relationship of apartness with the system governing our wellbeing cannot continue. The lessons from Cochabamba and Occupy Everywhere are that we have an alterntative vision, and we have the power to make it real.  To change the course of humanity, we must be bold enough to believe we are capable, and strategic enough to know how to use the ecological principle of unity of diversity to work in solidarity in myriad ways.

Download the report: Does Nature have rights? Transforming grassroots organizing to protect people and the planet. This report calls for action from the community-level to the U.N., and offers case studies of legal changes already underway in favor the Rights of Nature.