Eight Mexicans Who Should Be Heard 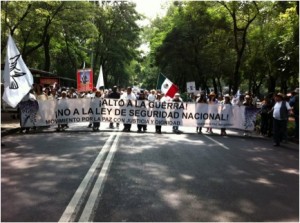 In the last year, an unprecedented number of Mexicans have received international recognition for their courageous work on behalf of migrants, workers, and the millions of victims of the country’s spiraling violence, institutional decomposition and appalling inequality. Just today, Mexican poet, Javier Sicilia, received a nod in this year’s TIME Magazine Person of the Year issue.

Below, we profile some of these movement leaders, artists, grass roots organizers, labor leaders, and clergy people working in the front trenches of the struggle for human rights. Through them we can hear the voices of millions more Mexicans crying out for justice and for the very soul of their nation.

They urge us to respond to the frightening militarization of Mexico, the hyper-exploitation of the poor, indigenous, and working classes; and the infuriating impunity enjoyed by well-connected and ruling-class criminals. They embody the struggle to end the profound injustice — both economic and legal — at the root of the murderous crime wave sweeping the country.

These eight distinguished advocates have been recognized because the Mexican government has failed to respond to a growing national emergency. As Mexico’s crisis deepens these patriots have gone abroad to sound an urgent alarm — amplified by the human rights, labor, and cultural groups who invited them — that Mexico is at the breaking point.

These are the kinds of Mexicans that President Obama, Congress, the media, the American public, and philanthropic foundations should be listening to and taking their cues from. These are the voices of those who have lived the tragic consequences of bad bi-national policies – so unlike President Calderon and his supporters north of the border who echo the hollow victories of the drug war and repeat market based delusions of success in the face of NAFTA’s bitter harvest.

The need for profound systemic changes on both sides of the border is painfully clear. 50 thousand Mexicans are dead since Presidents Calderón escalated the war for drug prohibition. Millions are displaced by the economic disaster of “free trade”. In Mexico, as in the US, ultra-rich plutocrats have hijacked the political system and are trying to foreclose on a dignified future for the poor and middle classes.

We need intelligent strategies and urgent action to end the “war on drugs”, level the economic playing field, and to make real our democratic aspirations on both side of the border. We must not let the inheritance of Mexico’s NAFTA generation be a disintegrating society where neither jobs nor educational opportunities exist for an expanding and politically repressed underclass.

In 2012 presidential elections will be held in Mexico as well as in the U.S. These elections, while no doubt important, will not bring the kind of deep changes needed in both countries. Such change and the movement necessary to make it happen must be driven from below — by those who bear the greatest burdens of inequality and have the most to gain by shattering the toxic status quo.

During 2011 movements led by victims of violence and those who are alienated from politics as usual have broken through the discourse of silence, altered the political landscape, and brought calls for revolutionary change back into view in both our countries.

The new struggle for fundamental reform is just getting underway and will take many forms, some of them unpredictable. But, you can be sure that, as resistance to war and inequality grows on both sides of the border the Mexicans leaders profiled below will be on its frontlines, joining their voices together with millions more on both sides of our shared border.

Manuel Perez Rocha is an Associate Fellow of the Institute for Policy Studies.