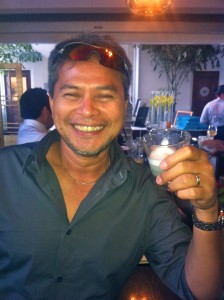 This is the second in a two-part interview by Global Exchange Reality Tours Intern Sue Sullivan with our Cambodia and Thailand program officer, Boreth Sun. Follow along to discover what it means to be an in-country representative of Reality Tours and our partnering organization Not For Sale.
—

This past October, Reality Tours’ in-country program officer for Cambodia and Thailand, Boreth Sun traveled to the Bay Area to speak at the 2011 Global Forum on Human Trafficking.

Reality Tours has been honored to work and partner with Boreth since 2007 and we took advantage of his visit to show him the office and take him for a brief tour of San Francisco…after all, a few of us here at Reality Tours have traveled with him throughout his beautiful country.  We also had the opportunity to interview him about his experiences working with us and facilitating Reality Tours.

Boreth’s perspective is informative, compelling and inspiring. Learn more about what it means to be an in-country partner and why it is important for the international community to visit and learn first-hand about life in South East Asia in the second in this two part blog.

Sue: What has your experience been as an In-Country Program Officer in Cambodia?

Boreth: It has been a learning experience for me because I have had a chance to meet with a lot of people from the US and elsewhere through Reality Tours. I take it for granted that everyone should know about these issues; about community issues, human rights issues, human trafficking, poverty, the community struggle for people to improve their livelihood, to manage their own resources, about the big fight against corporations coming to take over their land, I thought people should familiar with all these issues, but Reality Tours, you realize that through people coming in that sometimes, its their first time they are seeing things and looking at things from a different perspective. For me it has also been good to help show people, link people and promote cultural change, a change of mindset to look at things from different perspective. It really is rewarding for me that some of these participants, from the delegation Reality Tours, the Reality Tours have changed their life, it has changed their career, and they’ve become more socially aware and conscious. They even started working to promote social issues; to begin to look at issues far away form their community, far away from their homes. What they’re doing in the US can have big impacts elsewhere in the world. So for me, it’s rewarding to see that. Some of the people who participated on the tour also went back to Asia, went back to Thailand, went back to Cambodia and they are providing some support to local NGOs. Its not that they just went back and offered support, they went back, they learned more and then they give more and they can become sort of an agent of change, promoting, spreading news of what is happening elsewhere in the world that some people sometimes take it for granted. 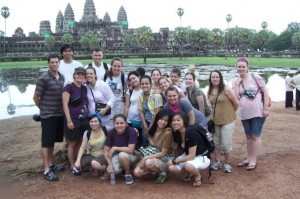 Sue: What are some of the most impactful moments you have witnessed while facilitating GX Reality Tours?

Boreth: Some of the most impactful moments were when the first time I showed people around, some students from the University of San Francisco, they were young, energetic, willing to learn and experience new things, we took them to a dump site where they see lots of people and kids as old as two years old up to teenagers scavenging for whatever in the dump site they could make a few dollars and also make their living.  I think at that moment, in the students you could see the mind shift and how people react to these types of issues. Some of the students have come back and start working for Not for Sale Campaign to promote children’s rights, basic rights of people who don’t have access to education and school… I think that’s what gets me going..to see that we can make a difference. A visit like that can make a difference. A visit like that can help people change because nothing is more powerful than going to experience things, see things and then doing things afterwards. Its not just organizing a trip for people to learn, to see to experience, but to actually transition people into taking some action and doing what they believe is right. I think that’s what gets me going and why I’ve been doing work with Global Exchange since 2007 and I’m still doing it now.

Sue: What are the most compelling issues that Global Exchange members and travelers should learn about? 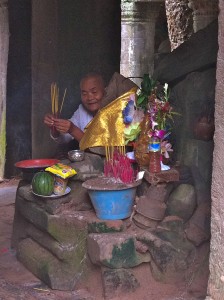 Boreth: You see, a lot of people in the US, they know about Cambodia mostly for the killing fields. They know about the Vietnam War, they know about the genocide in Cambodia, the killing fields in Cambodia and Angkor Wat, one of the oldest temples in Cambodia. But there’s more to it than that. The most compelling issue in Cambodia is mostly looking at poverty. After many years of war, poverty is the biggest issue. People are desperate, the majority of people are still poor, and that’s why they’re vulnerable to be trafficked; to be bought, sold and traded into different entertainment industries of the world. So those are the most compelling issues. But we should not focus on the symptom or the survival of the issue, we need to address the grassroots of the issue, which is poverty and food securities. Right now because of climate change, you look at Southeast Asia, you know Thailand and Cambodia; Cambodia is underwater now. People are going to loose their crop, their pig, their chicken, their duck, everything, their livestock. So the people are being affected by the climate change, by this flood and this pushes them further and further into poverty. So people become so desperate, they will do anything to survive. I think another big issue in Cambodia is environmental degradation. A lot of corporation companies from around the world, mostly Chinese are going there to destroy a lot of Cambodian resources. Deforestation is big, land concession is big, they take away people’s land and give the right to the corporation to grow different crops soybeans muang beans as part of the corporations trying to make big money. Also minerals, they extract minerals from the ground and again they are destroying the resources. In the future, in Cambodia, I think the biggest compelling issue, the biggest challenging issue will be environmental degradation because it impacts food security and people’s livelihoods, and destroys the social fabric, the social structure of community villages throughout the country. That’s going to be the biggest challenge. You can see that’s what’s happening now. The flooding is just the beginning of what’s to come I think.

Sue: Is there anything else that you’d like to share about your experiences as a Global Exchange in-country program officer? 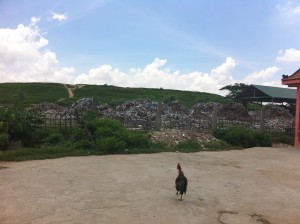 The Power of Recycling and Reclaiming- A visit to a dump and meeting with SCARO, a Cambodian NGO working with garbage collectors.

Boreth: What I just want to say is that I think what Reality Tours and Global Exchange are doing in Cambodia and Thailand is great. I think we become a bridge between the West and the East and Asia. I think we build a bridge for change. We exchange information, we exchange experiences, we exchange skills, the know how, the technologies. We are connecting the world and I think this is great work that Global Exchange is doing. And linking with the institutions such as NFS and the socially responsible NGOs and enterprises. We are helping build the bridges. In doing this, we become some sort of agent of humanities and change. When we do this, we can build the world to be a better and more peaceful place for everybody, not just the rich and powerful. 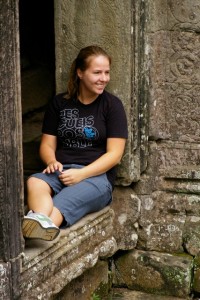 Special thanks to Sue Sullivan, Reality Tours’ intern for conducting this interview with Boreth.

Find out about how you can travel to Cambodia and Thailand on a Global Exchange Reality Tour.