The following post was written by 2011 Human Rights Awards Awardee, Pablo Solon. Solon was present in Durban, South Africa where the UN Conference on Climate Change (COP17) was being held. You can read updates from South Africa by Shannon Biggs, Director of Global Exchange’s Community Rights Program, who was also present in Durban. 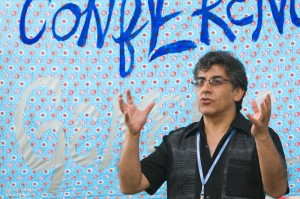 After 9 days of negotiations there is no doubt that we saw this movie before. It is the third remake of Copenhagen and Cancun. Same actors. Same script. The documents are produced outside the formal negotiating scenario . In private meetings, dinners which the 193 member states do not attend. The result of these meetings is known only on the last day.

In the case of Copenhagen it was at two in the morning after the event should have already ended. In Cancun, the draft decision just appeared at 5 p.m. on the last day and was not opened for negotiation, not even to correct a comma. Bolivia stood firm on both occasions. The reason: the very low emission reduction commitments of industrialized countries that would lead to an increase in average global temperatures of more than 4° Celsius. In Cancun, Bolivia stood alone. I could not do otherwise. How could we accept the same document that was rejected in Copenhagen, knowing that 350,000 people die each year due to natural disasters caused by climate change? To remain silent is to be complicit in genocide and ecocide. To accept a disastrous document in order not to be left alone is cowardly diplomacy. Even more so when one trumpets the “people’s diplomacy” and has pledged to defend the “People’s Agreement” of the World People’s Conference on Climate Change and the Rights of Mother Earth held in Bolivia last year. 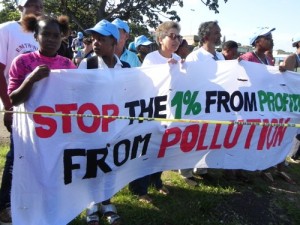 Durban will be worse than Copenhagen and Cancun. Two days before the close of the meetings, the true text that is being negotiated is not yet known. Everyone knows that the actual 131-page document is just a compilation of proposals that were already on the table in Panama two months ago. The formal negotiations have barely advanced. The real document will appear toward the end of COP17.

But more importantly, the substance of the negotiations remains unchanged from Copenhagen. The emission reduction pledges by developed countries are still 13% to 17% based on 1990 levels. Everyone knows that this is a catastrophe. But instead of becoming outraged, they attempt to sweeten the poison. The wrapper of this package will be the second commitment period of the Kyoto Protocol and a mandate for a new binding agreement. The substance of the package will be the same as in Copenhagen and Cancun: do virtually nothing during this decade in terms of reducing emissions, and get a mandate to negotiate an agreement that will be even weaker than the Kyoto Protocol and that will replace it in 2020. “The Great Escape III” is the name of this movie, and it tells the story of how the governments of rich countries along with transnational corporations are looking to escape their responsibility to reduce greenhouse gas emissions.

Instead of becoming stronger, the fight against climate change is becoming more soft and flexible, with voluntary commitments to reduce emissions. The question is, who will step up this time to denounce the fraud to the end? Or could it be that this time, everyone will accept the remake of Copenhagen and Cancun?

The truth is that beyond the setting and the last scene, the end of this film will be the same as in Copenhagen and Cancun: humanity and mother earth will be the victims of a rise in temperature not seen in 800,000 years.

Pablo Solon is an international analyst and social activist. He was chief negotiator for climate change and United Nations Ambassador of the Plurinational State of Bolivia (2009-June 2011). http://pablosolon.wordpress.com/