Gratitude to All Who Stand Up to Resist Injustice 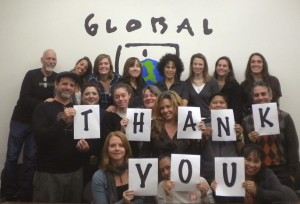 “Action is the antidote to despair.”  ~Joan Baez

“Never doubt that a small group of thoughtful, committed citizens can change the world. Indeed, it is the only thing that ever has.”  ~Margaret Mead

We here at Global Exchange offer gratitude to all those who have stood up to resist injustice, envision alternatives and take action. Together we are part of monumental shift, and there is no turning back.

“Moral outrage is the beginning. The days of apathy are over, folks. And once it has begun it cannot be stopped and it will not be stopped.”

Surely he is correct.

Who are you thankful for? What is the next victory and who will make it happen?