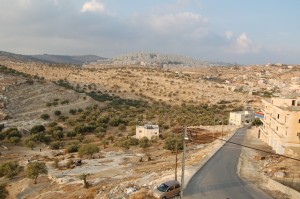 The following was written by Global Exchange intern Bethany Schmid:

For many, the term “segregation” brings to mind separate bathrooms, ‘Whites Only’ signs on stores and restaurants, the cone hats of the Klu Klux Klan, and other images of the American South in the 1960s. In order to bring the nation’s attention to the inhumanity of segregation during that time, “Freedom Rides” were organized as a form of protest during which black activists  boarded buses reserved for white citizens. These Freedom Rides are the inspiration for a similar kind of action…in Palestine.

Here too, blatant segregation affects the daily lives of Palestinians who are severely restricted in where they can live and work and travel—all within their own land. In contrast, Israelis are permitted to move freely in Palestine, even settling there, contrary to international law. The Separation Wall, checkpoints, and settlements are all examples of barriers to Palestinian movement in the occupied territories and serve as forms of discrimination favoring Israeli citizens.

On November 15, 2011, Palestinian Freedom Riders attempted to board a bus serving illegal Israeli settlements and East Jerusalem—destinations barred to Palestinians. See a video of their action here. On this same day, cities across the nation, including Oakland, organized peaceful demonstrations in solidarity with the Palestinian Freedom Riders. The aim of these activists was to call attention to the intrinsic segregation of Israel’s military occupation and its violations of international law, as well as to shed light on the role of corporations in maintaining the occupation, such as the companies running these bus lines: Veolia Environnement, a French transnational company, and Egged, an Israeli company.

Despite their actions being nonviolent, each Palestinian Freedom Rider was arrested and dragged from the bus. According to Jewish Voice for Peace, as he was being arrested, one activist called for people to stand in solidarity with the struggle for freedom, justice, and dignity, and to divest from corporations involved in the occupation. To see how you can become involved in this work, visit our current Global Exchange Campaign, Economic Activism for Palestine, which supports corporate accountability campaigns targeting companies profiting from the occupation of Palestine, such as Veolia Environment.

And do whatever you can to support the goal of the Palestinian Freedom Riders by bringing attention to the Israeli occupation and the corporations that profit from it (see Who Profits from the Occupation for more information). This could mean anything from starting your own corporate accountability campaign, to educating your school or community about Israel’s violations of international law, to signing a petition to divest from a company involved in the occupation.

Take Action: Check out our Economic Activism for Palestine Program for ways to get involved and take action.