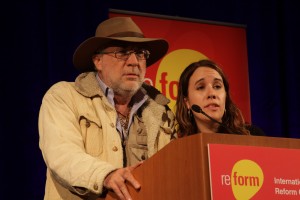 After months of marches and caravans covering thousand of kilometers of Mexico’s highways and back roads, Javier Sicilia, other family members of murder victims, along with a small support team, traveled to Washington, DC and Los Angeles, CA at the invitation of Global Exchange.

They came with the goal of making the movement more visible in the U.S. and to talk about three things:

The decision to more deeply engage the public and officials in the United States is based on a recognition by the movement that any real and lasting solutions to the crisis of violence and impunity that has exploded during Mexico’s drug war will require deep changes on both sides of the border.

In Washington, they gave testimony to the Inter-American Human Rights Commission and the head of Human Rights Watch (which just delivered a scathing report on torture by Mexico’s military including the elite marine units favored by President Calderón). In events organized by our partner, the Washington Office on Latin America (WOLA), they also met with Obama Administration officials, key Senate offices and addressed the public at a forum hosted (and videotaped) by the Woodrow Wilson Institute. 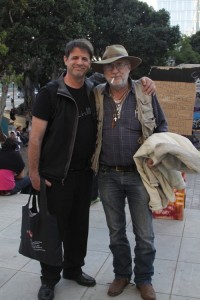 In Los Angeles, Sicilia was a headliner at the International Conference of the Drug Policy Alliance attended by over 1,000 advocates and organizers from around the world. During his brief visit Sicilia visited the Occupy Los Angeles, met with reporters and editorial board members, spoke at a large open air rally against the drug war in MacArthur Park, and gave TV interviews broadcast nationally on Univision and Telemundo.

The conversation probed the causes of Mexico’s anguish and the terrible forces tearing and testing the fabric of the nation. For the United States, Mexico’s emergency tests our national character and ability to learn as people and neighbors.

The Movement for Peace with Justice and Dignity has plans to do more in the U.S. during 2012 as both Mexico and the U.S. face presidential elections. Mexico’s crisis and the urgent need to address it need to be put front and center whenever and wherever possible.

While in the U.S., Javier Sicilia gave voice to the idea that the same impulse to seek deep structural reforms that inspires the movement in Mexico is reflected in the Occupy Wall Street and other surging movements that aspire to break the death grip of money and power over our democracies. We are all in this together.

Our friends from Mexico will be back up north soon and will be looking for your help to take the struggle for peace to the next level. Stay tuned and refer your friends to our e-mail list.