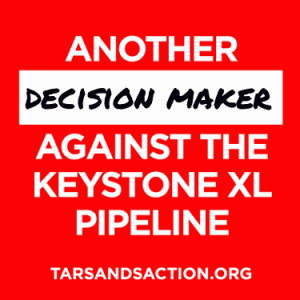 The title steals the last line from Tar Sands Action‘s morning blog (“It’s going to be very good day for the 99% of us who aren’t an executive at TransCanada.”) with the update that it WAS a great day. By official count 12,000 of us participated in the Day of Action to surround the White House. Some called it a “giant hug”, some said we’d “encircle the White House to show President Obama that he has the support he needs to say NO to the Keystone XL pipeline” and at last night’s meet up and strategy session Canadian author and activist Naomi Klein said that some could also call it “a house arrest”.

Read Global Exchange’s twitter feed for posts and pictures as it was happening. 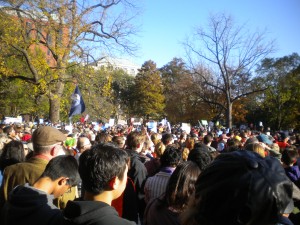 This Sunday at noon we gathered, we got our posters, we saw friends, we cheered as contingents from across the country entered

Lafayette Park and excitement built as Bill McKibben welcomed us all. Then Mike Brune from the Sierra Club,  Mark Ruffalo, James Hansen, Naomi Klein, Nobel Prize winner Jody Williams, Vice President of the Oglala Lakota Nation Tom Poor Bear, Rev Lennox Yearwood and the president of Sojourners, elected reps from TN and MD, a rancher from Nebraska, the president of the Transport Workers Union all joined the stage to explain the terrors of the Keystone XL pipeline proposal and quantify this tipping point moment to stop it’s approval by President Obama before the end of the year. 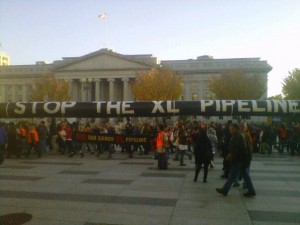 thanks James Ploeser for the photo!

THEN WE DID IT! We got instructions from the Tar Sands Action team (BRAVO to all of you btw!) and headed in 3 teams to completely encircle the White House. And we did it not just in one ring, but in some places two and three rings deep. A giant, long, inflated, black ‘pipeline’ marched back and forth as we chanted ‘Yes You Can, Stop The Pipeline’ over and over and over again.

As the sun set over Lafayette Park we returned for celebratory speeches from Maude Barlow, Dick Gregory, members of Gulf oil disaster impacted communities, Jane Kleeb from BOLD Nebraska (who convinced us all we are pipeline fighters, Sand Hill lovers and Ogallala Aquifer lovers), Physicians for Social Responsibility, a First Nations Chief from British Columbia, chief  and heard a message from Van Jones. 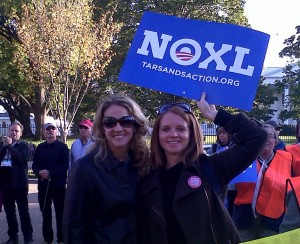 Board member and friend Deborah James and I this afternoon

We know what happened today – it’s been decades since an issue has brought these numbers to Washington to demonstrate such strong support for a President to stand up against corporate interests and be held accountable to his own campaign promises. We demonstrated the very best of our people power. We just need to hear from the President that he was listening.

Send a message to the President now – click here to tell Obama to reject the pipeline. There is no time to wait.