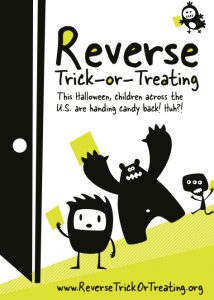 This past Halloween, children and families spread the word about fair trade, switching up holiday conventions a bit while having a good time to boot. Folks from across the country sent in orders for the popular Reverse Trick-or-Treating kit, and Global Exchange distributed nearly 1,000 of them to supporters, both seasoned vets of Reverse Trick-or-Treating and first-timers.

Inside the kits? Delicious fair trade chocolate pieces, printed cards with an introduction to fair trade and the abuses of the cocoa industry, and an invitation to learn more on the Reverse Trick-or-Treating website.

In West Africa the abuses of the cocoa industry are rampant, including substandard wages, oftentimes forced labor. The Dark Side of Chocolate is a heart breaking documentary that we’ve been working to promote which highlights that those consigned to slavery are often children. We also released a report earlier this year titled Still Time to Raise the Bar: The REAL Corporate Social Responsibility Report for the Hershey Company 2011, which indicates that confectioner giant Hershey’s has a long way to go to ensure that it’s cocoa slavery free. As a complement to our advocacy, we’re using Reverse Trick-or-Treating to build a connection, child to child, and to enlist children as ambassadors to encourage adults to make a change in their chocolate buying habits.

To order a copy of The Dark Side of Chocolate, visit our website or email fairtrade (at) globalexchange (dot) org.

Reverse Trick-Or-Treating would not have been possible without the help of the numerous individuals and organizations we’ve worked with. Though we can’t thank everyone individually, we’d like to focus attention on the following groups:
• Equal Exchange, for collaborating with us on Reverse Trick-Or- Treating for the 5th year in a row and donating fair trade chocolate for the campaign;
• Coco-Zen and Sweet Earth Organic Chocolates for their generous donations;

Reverse Trick-Or-Treating was featured in USA Today and the Boston Herald. And Holistic Moms featured RTT on their blog.

Got pictures of your participation? Send them in to kylie (at) globalexchange (dot) org.

Speaking of photos, the Raise the Bar, Hershey campaign spent the Halloween season collecting photos from all of you for the Hershey Halloween Photo Contest to send Hershey the clear message that we would not accept Halloween candy made with child labor. A big congratulations goes out to Rasha Sharhan from Cabrini University who submitted the winning photograph!

A special shout out also goes out to Amber Bruce and her super hero kids for submitting their photo.

In other Fair Trade chocolate news, our Raise the Bar, Hershey campaign partner, Green America traveled to Hershey, Pennsylvania to present the more than 100,000 petition signatures to Hershey management demanding a fair deal for workers.