Jailed for Sailing to Gaza, Challenging the Blockade

By Medea Benjamin and Robert Naiman 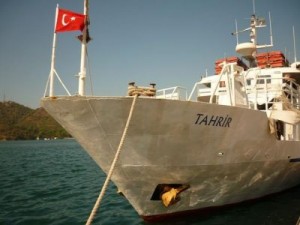 Two boats full of courageous passengers were on their way to Gaza when they were intercepted on Friday, November 4, by the Israeli military in international waters. We call the passengers courageous because they sailed from Turkey on November 2 with the knowledge that at any moment they might be boarded by Israeli commandos intent on stopping them—perhaps violently, as the Israeli military did in 2010 when they killed nine humanitarian aid workers on the Turkish boat named Mavi Marmara.

The boats—one from Canada and one from Ireland—were carrying 27 passengers, including press and peace activists from Ireland, Canada, the United States, Australia and Palestine. They were unarmed, and the Israeli military knew that. They were simply peace activists wanting to connect with civilians in Gaza, and the Israeli military knew that. Yet naked aggression was used against them in international waters—something that is normally considered an act of piracy.

The passengers on the boats were sailing to Gaza to challenge the U.S. – supported Israeli blockade that is crippling the lives of 1.6 million Palestinian civilians in Gaza. They were sailing to stand up against unaccountable power—the power of the Israeli government—that has been violating the basic rights of the 5.5 million Palestinians that live inside Israel’s pre-1967 borders or in the Occupied Territories.  They were sailing for us, civil society, who believe in human rights and the rule of law.

The Arab Spring – which has now spread to cities across the United States in the form of the “#occupy” movement, and has been echoed in protests against economic injustice in Europe and Israel as well – has fundamentally been a challenge to unaccountable power. Some countries experiencing this protest wave are dictatorships under military rule or ruled by monarchies; others are generally considered “democracies.” But in all instances the majority feel that they have been shut out of decision-making and have been harmed by policies benefiting a narrow elite with disproportionate power.

The blockade of Gaza’s civilians is an extreme example of unaccountable power. Palestinians in Gaza aren’t allowed to vote for Israeli or American politicians. But due to political decisions taken in Israel and the United States, Palestinians in Gaza are prevented from exporting their goods, traveling freely, farming their land, fishing their waters or importing construction materials to build their homes and factories.

We have been to Gaza before, where we have seen the devastation firsthand.  We have also been to Israel and the West Bank, where we have seen how the Israeli government is detaining Palestinians at checkpoints, building walls that cut them off from their lands, demolishing their houses, arbitrarily imprisoning their relatives and imposing economic restrictions that prevent them from earning a living. We have seen how Palestinians, like people everywhere, are desperate to live normal and dignified lives.

A UN Report released in September found that “Israel’s oppressive policies [in Gaza] constitute a form of collective punishment of civilians”, that these policies violate both international humanitarian and human rights law, and that the illegal siege of Gaza should be lifted.  The International Committee of the Red Cross also called the blockade of Gaza a violation of international law because it constitutes “collective punishment” of a civilian population for actions for which the civilians are not responsible. The Red Cross is a neutral humanitarian organization. It doesn’t usually go around making pronouncements on matters of public policy. The fact that it has done so in this case should be a strong signal to the international community that the blockade of Gaza is extreme and must fall.

History has shown us again and again that when political leaders decide it’s in their interest, then peace, diplomacy, negotiations are possible. Recently, Israel and Hamas – with the help of the new Egyptian government – successfully negotiated a prisoner exchange that had eluded them for five years. In speeches, the Israeli government “opposes negotiations with Hamas,” and in speeches, Hamas “opposes negotiations with Israel.” But when they decided it was in their interest, they had no problem sitting down at the table and hammering out an agreement.

But the people of Gaza can’t wait for political leaders to decide it’s in their interest to negotiate, so it’s up to us—as civil society—to step up the pressure. That’s what these waves of boats are doing. That’s what the boycott, divestment and sanctions movement is doing.

More than a year ago, President Obama called the blockade unsustainable. “It seems to us that there should be ways of focusing narrowly on arms shipments, rather than focusing in a blanket way on stopping everything and then, in a piecemeal way, allowing things into Gaza,” he said. That hasn’t happened. Why not? Why shouldn’t it happen now? What does blocking Palestinian exports from Gaza to Europe or keeping people from getting medical treatment abroad have to do with arms shipments?

Medea Benjamin is the cofounder of CODEPINK and Global Exchange. Robert Naiman is the Director of Just Foreign Policy.