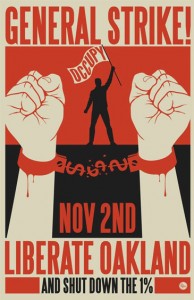 On November 2, 2011, Global Exchange will stand in solidarity with the Occupy Oakland (#OO) movement and the broader Occupy Wall Street (#OWS) movement to participate in the General Strike/Day of Action.

Join us on the streets (or online) tomorrow and unite with thousands to demand an end to corporate greed, bank bailouts, the gross income disparity destroying this planet and a shift to new alternatives for a peaceful and just society. We are the 99% who say enough is enough.

We know the facts, but seeing them together is staggering:

Enough is enough.
We support our local community.
We resist injustice everywhere.
We are the 99%.

On Wednesday, our staffed office in San Francisco will take to the streets in Oakland as thousands did during the General Strike of December 3, 1946. Our Fair Trade stores in Berkeley, San Francisco and DC will be open to support artisans in the majority world and 9.9% of store income for the day will be donated to #occupyoakland and #occupydc.

Keep up to date: We’ll be using our website, blog, twitter account and facebook as a hub of information and live updates, so check them throughout the day. The good folks at Movement Generation have a great list of events posted here.

Join us as we stand in solidarity with the 99% and demand justice, people power NOT corporate power and true democracy. 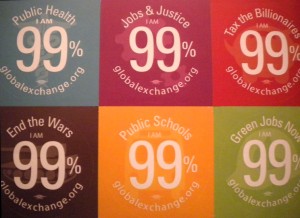 Show your support – “I AM 99%” stickers are now available. Click here to order sheets of 6, calling for: Public Health, Jobs & Justice, Tax the Billionaires, End the Wars, Public Schools and Green Jobs Now.

Catch up on movement news: At Global Exchange, we’ve been posting our observations as this movement grows, as well as blogging about our participation in various marches, rallies and our recent experience in New York at #OWS.

Get Occupy Updates Sent Direct to You: Subscribe to our People to People Blog here.

Just Added! Check out our photos from the Occupy Oakland General Strike/Day of Action!