“Please Don’t Just Take it From Me”: Palestine & Israel Past Participant’s Insightful Story 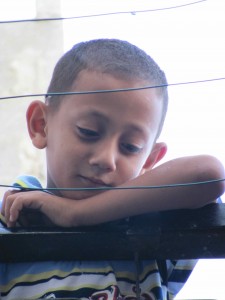 A young Palestinian boy in the West Bank by Ken Yale

When Global Exchange founded Reality Tours back in 1988, it did so with the belief that travel can be a tool for promoting peace and cross-cultural understanding. Since then, we have committed ourselves to organizing enriching, thought provoking and philosophically complex Citizen Diplomacy delegations around the world, even when those nations are often demonized as enemy states or part of the “Axis of Evil”.

Citizen diplomacy is based on the concept that individuals have the right to help influence and shape foreign policies for their country by informally meeting with global citizens and learning about their reality.  As you will read  below, Ken Yale’s reflection and learning is exactly the kind of transformative experience that keeps us here at Reality Tours ever motivated to continue our work to have you “Meet the People, Learn the Facts, and Make a Difference”!

“PLEASE DON’T JUST TAKE IT FROM ME…”

“Facts do not cease to exist because they are ignored.”  – Aldous Huxley

“Begin challenging your own assumptions.  Your assumptions are your windows on the world.  Scrub them off every once in awhile, or the light won’t come in. “  – -Alan Alda

We are often unconscious of the potential and significance of the moment in which we live.  This was certainly true for me in July, 2010, as I prepared to embark on a Global Exchange Reality Tour of the West Bank in a period when progressive movements in the region did not appear to be very strong.  Less than six months later, the Arab Spring began in Egypt and Tunisia.  Now it is hard for anyone with open eyes to miss the power of this unique historic moment as growing waves of mass uprisings for human rights, democracy, and social justice continue to spread outward from the Middle East and North Africa to nations on every continent.

It’s not easy for most of us in the US to understand the conditions and dynamics that are fueling such rapid change in the region and offering inspiration and hope for global social justice.  We struggle to either discover or unlearn decades of history that have been largely ignored, obfuscated, or distorted by a corporate controlled media and an educational system that discourages critical thought and examination.  For many of us who grew up in Jewish families, we are further challenged to find the courage to confront a lifetime of cultural and religious narratives that demand allegiance to a settler colonial Israeli state as a foundation of our identity.

As a young child growing up in a Jewish Chicago neighborhood, every Sunday morning my parents would send me off to temple with a donation for Israel.  For every dime, we would get a stamp with an image of a leaf to paste onto a drawing of a tree.  When you filled all the branches, you had funded another tree that would be planted in the newly formed nation of Israel, then only about ten years old.  We should feel proud, we were told, to support our people from all over the world, who were returning to the land God gave just to us and making the barren desert bloom despite being surrounded by hostile Arabs who were trying to push us into the sea.  This narrative, repeated in many forms throughout my childhood, was never questioned or challenged in my family or community.

Landing in Tel Aviv airport about fifty years later, I made my way to the baggage claim past a long hallway displaying Zionist art from the 1950’s.  Dozens of posters from the United Israel Appeal, with titles like “Conquering The Wasteland” and “One Million In Israel, On To The Second Million” encouraged the Jewish Diaspora to come settle in Israel with slogans and imagery eerily familiar from my childhood.   An Israeli cab driver picked me up and soon we came upon a group of 25 orthodox Jews blocking an intersection and screaming that we should not be driving on the Sabbath.  As we made a U-turn, 3 teenagers ran toward the taxi and flung eggplants the size of bricks against the cab.  “Welcome to the real Israel,” I thought!

Once I finally connected with Mohamed, the Global Exchange trip leader from the Siraj Center, I immediately felt more relaxed and secure.  He was warm, caring, articulate and insightful, with an amazingly deep knowledge of the history, politics, and culture of the region.   As we drove towards our orientation meeting, Mohamed noticed me staring at a very long, straight row of trees paralleling the highway for miles.  I was fantasizing about how the trees we helped fund as kids could have been planted in a place just like this, when Mohamed said,  “Beautiful, isn’t it?  You’d never know those trees were placed there so that people driving this popular highway won’t see the wall just behind it.”

Mohamed was referring to the 450 mile long separation barrier that Israel has constructed around much of the West Bank and Jerusalem, the most visible symbol of the apartheid state built through military conquest, occupation and the systematic dispossession of Palestinian land and human rights.  It is around 25 feet high in many areas, topped with concertina wire and electrified fence, monitored by surveillance cameras, snipers, dog patrols and soldiers.  It often divides Palestinian communities from their own land.  The wall is the backbone of the infrastructure and policies of occupation that include extensive military checkpoints, mandatory ID cards, restricted access to roads and water, demolitions of Palestinian homes, mass arrests, repressive legal, administrative, economic and military regulations, and the construction of Jewish settlements which confiscate Palestinian lands in violation of international law.  The wall is often covered with the graffiti of resistance, and is a frequent target of Palestinian, Israeli, and international protest.

Mohamed and I are about the same age, so we grew up at the same time, but in obviously two very different worlds.  Mohamed’s family has lived in Palestine for many generations, but they were displaced from their homes and can no longer travel freely.  Just before Palestine was partitioned in 1947, there was a total population of 1.75 million, one third of whom were Jewish, owning 6% of the land.  After the war of 1947-48, the new state of Israel was formed with 78% of the land, leaving just 22% for Palestinians, primarily in the West Bank, Gaza Strip, and East Jerusalem.  Today, Gaza is under a military and economic blockade and 200,000 Israeli Jews have established settlements in East Jerusalem.  A report released during our tour by the Israeli human rights group, B’Tselem, said Jewish settlements now control more than 42 percent of the West Bank through their jurisdiction and regional councils.

On a daily basis, occupied Palestinian territories are increasingly being carved up into small, disconnected and impoverished enclaves, much like the Bantustans of South African apartheid.  Yet I, who had never set foot on this land before, had so many more rights than Mohamed and his family, including the ability to get full Israeli citizenship, based on nothing more than my being born a Jew thousands of miles away.  What a painful irony that this is rationalized in the name of liberating Jews from centuries of anti-Semitism.  “Never Again” we were often told in my community, with reference to the Holocaust.   But is “Never Again” only for Jews, or for everyone?  Justice or Just Us?  Can there be a humane and fulfilling life for any people, no matter how oppressed, that is built on a foundation of ethnic cleansing, denial of human rights for others, and alliance with international corporate and imperial powers? 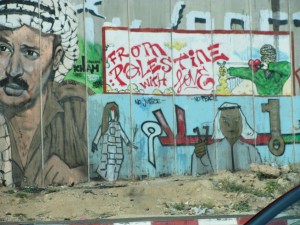 One of the many things I appreciated about Mohamed was that despite his incredible knowledge, he would always say, “Please don’t just take it from me.  Engage people from every perspective, see with your own eyes, make your own meaning, discover your own truths.”  Our Global Exchange tour provided the opportunity to meet with two or three organizations and countless individuals every day, both Palestinian and Israeli, some activists and others not.  We heard stories, stories, and more stories, all very moving, from human rights groups, a prisoner’s group, military refuseniks, a woman’s art cooperative, a youth theater, a Jewish settler organization, the nonviolent direct action movement, residents of refugee camps and kibbutzim, politicians, university students and faculty, international solidarity activists, and so many more, including a wonderful home stay with an open and generous Palestinian family.

Perhaps the day that was most memorable was our trip to Hebron.  Despite its location on Palestinian land in the West Bank, a one square kilometer section of the Old City has been occupied by 400 Israeli settlers with the support of 1500 Israeli soldiers.  In Hebron as a whole, over 10,000 Jewish settlers live in 20 settlements.  The military has closed down a large section of the main street in the Old City, shuttering hundreds of Palestinian shops, evicting their owners, and banning Palestinians from even walking on the street.  I will never forget the striking image of dozens of stray dogs that roamed the once teeming market area, with more freedom of access than the rightful Palestinian residents of Hebron.

If you are considering visiting the Middle East at this incredible time in its history, I’d strongly encourage you to go with a Global Exchange Reality Tour and/or the Siraj Center.  They made it possible for me to make personal and organizational connections and experience the region in ways I couldn’t possibly have arranged on my own.  Every time I read the news these days, I access lenses and insights from the trip that I will carry with me for the rest of my life.

But please, don’t just take it from me…