Happy Fair Trade Month everyone! After a month on the road, I’m back rounding up the latest Fair Trade news, and boy is there a lot of it! 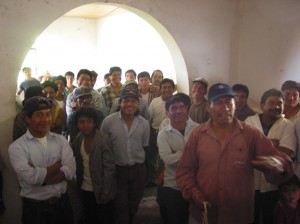 On September 15, 2011 Fair Trade International (FLO) and Fair Trade USA issued a joint statement about the decision to part ways:

Fairtrade International (FLO) and Fair Trade USA (FTUSA) share a belief in the importance of empowering producers and workers around the world to improve their lives through better terms of trade. However, as we look to the future, we recognize that we have different perspectives on how best to achieve this common mission.

As a consequence, Fair Trade USA has decided to resign its membership of the Fairtrade International (FLO) system effective December 31, 2011.

You can read Fair Trade USA’s statement about why they are leaving FLO here. Also check out the Catholic Relief Services blog post Paul Rice makes the case for Fair Trade for All.

In response to the news, Fair Trade Resource Network just announced plans to conduct 3 public webinars  in October and November with panelists from FTUSA and FLO, to discuss what implications the split has for producers and the Fair Trade movement.

The first webinar is described as “A Community Discussion of What Fair Trade USA Leaving Fairtrade International Means for Producers and Fair Trade” and Paul Rice, CEO of Fair Trade USA is confirmed as a panelist. To sign up for this webinar go here. 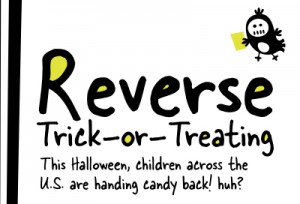 Reverse-Trick-or-Treating is a way for kids on Halloween to help end the exploitation of children in the cocoa industry and raise awareness of Fair Trade.

Trick-or-Treaters hand Fair Trade chocolate back to adults, with informational cards attached, to explain the problems of the cocoa industry and how Fair Trade presents a solution.

How you can get involved:  Order your Reverse Trick-or-Treat kit. (Deadline to order your kit is by October 13th.) Each kit contains 15 mini chocolates, informational cards and an instruction leaflet. The kits are free, you pay just $7.50 for shipping, but we are asking participants to round up if they are able, to help cover costs.

If you don’t manage to get one of the kits, you can still take part! Download free flyers and pass them out on Halloween. If you are part of a group, school or organization and want to purchase a group kit, please visit Equal Exchange.

OCTOBER IS FAIR TRADE MONTH
October brings cooler weather, spooky festivities, and Fair Trade! Now in its 8th year, Fair Trade month is a time for folks to take action and get involved in this socially responsible movement. This year’s theme is “Every Purchase Matters.”

Throughout the month, conscious consumers and ethically-minded brands will unite to celebrate and promote Fair Trade. A variety of education events, in-store sampling programs and online initiatives have been planned to help increase awareness and sales of Fair Trade Certified products, ultimately leading to greater impact for farmers and workers in developing countries.

Here’s a list of top ten ways to get involved in Fair Trade month.

BEN & JERRY BRING FAIR TRADE TO LATE NIGHT T.V. ….AGAIN!
My faves Ben & Jerry are back at it. Once again, they brought Fair Trade into the mainstream spotlight by guest appearing on Late Night with Jimmy Fallon. Some may a recall an earlier Jimmy Fallon visit by this dynamic duo back in March when they released their new Fair Trade ice-cream flavor.

LINKS WORTH CHECKING OUT