This week marks the 10-year anniversary of the signing of the Harkin-Engel Protocol – an agreement by the country’s largest chocolate companies, including Hershey’s, committing to put an end to forced child labor on cocoa farms in West Africa by 2005. The Protocol pledged to develop and implement voluntary standards to certify cocoa produced without the “worst forms of child labor,” (defined according to the International Labor Organization’s Convention 182). 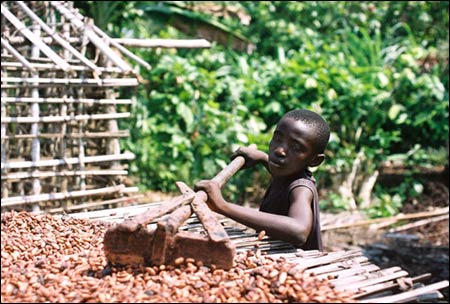 Child Labor in the Cocoa Industry

Ten years later, no progress has been made. Last week Global Exchange, Green America and ILRF (International Labor Rights Forum) released a report targeting Hershey’s titled ‘Time to Raise the Bar, Hershey!’ which details how hundreds of thousands of children are still forced to work under abusive conditions for long hours on cocoa farms in West Africa, while others are victims of trafficking and forced labor, all for a Hershey bar. The documentary, The Dark Side of Chocolate is a great resource to learn more.

Like many issues involving human rights abuses today, it is not the corporations who are profiting from the unjust practices that are taking a stand to put an end to them – it is the people that are rising up to create change by calling for an end to the abuses.

This is the kind of action that we have seen emerge through the Fair Trade movement, particularly through advocating for consumers to buy Fair Trade chocolate instead of chocolate tainted with child labor.

As we approach one of the most popular holidays for chocolate consumption, Halloween, there is a great way that children and families can help end child labor in the cocoa industry and promote Fair Trade – by participating in Reverse Trick-Or-Treating! 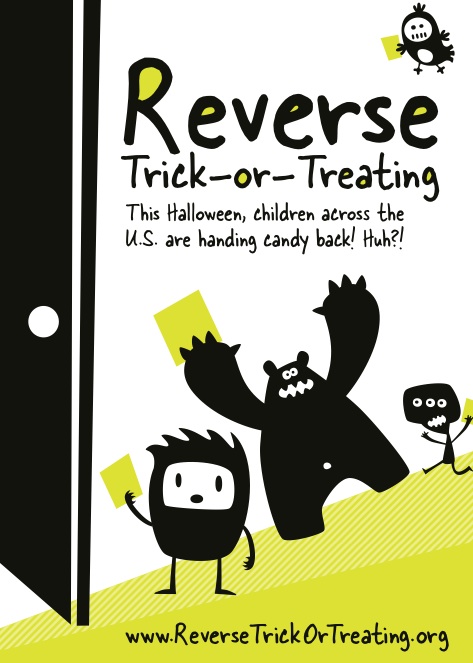 For the fifth year in a row, Trick-or-Treaters will be handing Fair Trade chocolate back to adults, with informational cards attached, to explain the problems of the cocoa industry and how Fair Trade presents a solution. By providing children with a way to be active, hundreds of thousands of households in the US are getting the message that forced child labor will not be tolerated by our kids.

Our partners at Equal Exchange sum up the main idea behind Reverse Trick-Or-Treating beautifully:

‘The inspiration for Reverse Trick-or-Treating rests on the belief that the simple act of one person saying to another “There’s a problem. There’s a solution. Let’s do something” can be very powerful. And if a child says this to an adult – it’s doubly powerful. Further, we believe that such acts will demonstrate to the large corporations, and to public officials, that people are paying attention, people care, and they want action”

If enough people take a stand, on Halloween and throughout the year, to organize and educate others in their community about the reality of forced child labor and the importance of Fair Trade as a tool for combating it, we might actually have something to celebrate on the next anniversary of the Harkin-Engels Protocol.