Ten Reasons to Move Cheney’s Book to the Crime Section 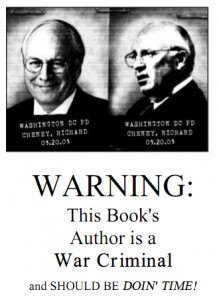 Former Vice President Dick Cheney was given a multi-million contract to write a book about his political career. According to Cheney’s media hype, the book, called In My Time, will have “heads exploding all over Washington.” The Darth Vader of the Bush administration offers no apologies and feels no remorse. But peace activists around the country are stealthily gearing up to visit bookstores, grab a stack of books, and deposit them where they belong—the Crime Section.

Here are ten of Cheney’s many offenses to inspire you to move Cheney’s book, and to insert these bookmarks explaining why the author of In My Time should be “doin’ time.”

1.   Cheney lied; Iraqis and U.S. soldiers died. As Vice President, Cheney lied about (nonexistent) weapons of mass destruction and Saddam Hussein’s (nonexistent) ties to the 9/11 attack as a way to justify a war with a country that never attacked us. Thanks to Cheney and company, hundreds of thousands of Iraqis and over 4,000 American soldiers perished in a war that should never have been fought.

2.   Committing War Crimes in Iraq. During the course of the Iraq war, the Bush/Cheney administration violated the Geneva Conventions by targeting civilians, journalists, hospitals, and ambulances, and using illegal weapons, including white phosphorous, depleted uranium, and a new type of napalm.

3.   War profiteering. U.S. taxpayers shelled out about three trillion dollars for the Bush/Cheney wars in Iraq and Afghanistan—a major factor in our nation’s present economic meltdown. But Cheney and his cronies at Halliburton made out like bandits, getting billions in contracts for everything from feeding troops in Iraq to constructing the U.S. Embassy in Afghanistan to building the infamous Guantanamo prison. Cheney was CEO of Halliburton from 1995-2000, leaving for the VP position with a $20 million retirement package, plus millions in stock options and deferred salary. Before the Iraq War began, Halliburton was 19th on the U.S. Army’s list of top contractors; with Cheney’s help, by 2003 it was number one—increasing the value of Cheney’s stocks by over 3,000%.

4. Violating basic rights. Cheney shares responsibility for holding thousands of prisoners without charges and without the fundamental right to the writ of habeas corpus, and for keeping prisoners hidden from the International Committee of the Red Cross.  He sanctioned kidnapping people and simply rendering them to secret overseas prisons. His authorization of the arbitrary detention of Americans, legal residents, and non-Americans–without due process, without charges, and without access to counsel–was in gross violation of U.S. and international law. A fan of indefinite detention in Guantanamo, Cheney writes in his book that he has been “happy to note” that President Obama failed to honor his pledge to close the Guantánamo prison.

5. Advocating torture. Cheney was a prime mover behind the Bush administration’s decision to violate the Geneva Conventions and the U.N. Convention Against Torture and to break with decades of past practice by the U.S. military by supporting “enhanced interrogation techniques.” This led to hundreds of documented cases in Iraq and Afghanistan of abuse, torture and homicide. The torture included the practice known as “water-boarding,” a form of simulated drowning. After World War II, Japanese soldiers were tried and convicted of war crimes in US courts for water-boarding. The sanctioning of abuses from the top trickled down, as the whole world saw in the photos from Abu Ghraib, becoming a recruiting tool for Al Qaeda and sullying the reputation of our nation.

6. Trying to prolong the Afghan war. Not content with the damage he caused as VP, Cheney continues to encourage more grist for the war machine. In his book he criticizes President Obama’s decision to withdraw, by September 2012, the 33,000 additional troops Obama sent to Afghanistan in 2009. He has also cautioned Obama not to pull out all the troops from Afghanistan at the planned date of 2014. “I don’t think we need to run for the exits,” he told Fox News Sunday” host Chris Wallace.

8. Spying on us. Cheney was the mastermind behind the National Security Agency’s warrantless wiretapping program that spied on thousands, perhaps millions of American citizens on American soil. This massive government interference with personal phone calls and emails was in violation of FISA (theForeign Intelligence Surveillance Act), the Federal Telecommunications Act, and 4th Amendment of the Constitution.

9. Bomb, bomb, bomb Iran. When Cheney was CEO of Halliburton, the company skirted the law against investing in Iran by using a phony offshore subsidiary. Once VP, however, Cheney advocated bombing Iran. “I was probably a bigger advocate of military action than any of my colleagues,” Cheney said in response to questions about whether the Bush administration should have launched a pre-emptive attack on Iran’s nuclear facilities prior to handing over the White House to Barack Obama. Cheney thinks Obama is too soft on Iran, and has said that the only way for diplomacy with Iran to work is if Obama alsothreatens to bomb the country. Negotiations are “bound to fail unless we are perceived as very credible” in threatening military action against Iran, he said. It seems that wars with Iraq, Afghanistan and Libya, plus drone attacks in Pakistan and Yemen, are not enough to satisfy Cheney’s war addiction. But wait, there’s more….

10. Favored bombing Syria—and North Korea—instead of negotiating. One of the key anecdotes in Cheney’s memoir is his recollection of a session with the National Security Council in 2007, when he advised Bush to bomb a suspected Syrian nuclear reactor site. “After I finished,” he writes, “the president asked, ‘Does anyone here agree with the vice president?’ Not a single hand went up around the room.” Luckily, Cheney’s advice was dismissed in favor of a diplomatic approach (although the Israelis bombed the site in September 2007). As for North Korea, in his book, Cheney calls former Secretary of State Condoleezza Rice naive for trying to forge a nuclear weapons agreement with North Korea.

Enough? Since President Obama is not interested in holding Cheney accountable, the least we can do is show our disgust by dumping his books in the Crime section and inserting this bookmark. And if you happen to be lucky and catch one of Cheney’s book signings, bring along a pair of handcuffs.

Medea Benjamin is cofounder of the human rights group Global Exchange and the peace group CODEPINK.