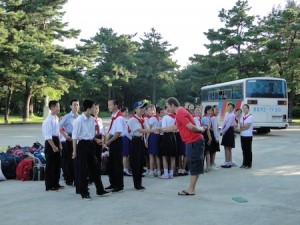 The following was written by Jeremy Jimenez, who traveled on a Global Exchange Reality Tour trip to North Korea in 2010.  Jeremy Jimenez has taught Ancient History, Global Studies, and IB Economics at a variety of middle and high schools across the world, including urban and suburban schools in New Jersey, two international schools in Venezuela, and as a guest lecturer to dozens of schools across Norway as a Fulbright Roving Scholar. He is currently pursuing a Ph.D in International and Comparative Education at Stanford University.

Having now been to 110 countries, I would not hesitate to state that there is no place on Earth like North Korea. In just the 15 minute ride from Pyongyang’s airport, you feel immediately transported to another era. The city is immaculately clean, the whispered clanking of a bike or occasional car among the little noise you hear in its capital. This calming effect is, of course, somewhat mitigated by the proliferation of posters extolling agricultural production or anti-imperialist slogans. While it is not uncommon to see a solo traveler passing by with a friendly smile, more memorable is how often one encounters people gathered in groups. This mass organization of society manifests itself regularly as you are whizzing past countless brief slices of daily life, whether it be soldiers/civilians practicing some marching formation, women huddled in close proximity polishing the sidewalk clean with brushes, or ‘field trips’ of farmers to the ‘holy sites’ of North Korea. While this collectivist orientation is fairly typical of East Asian cultures in general, North Korea takes it to a whole new level.

Tours, like nearly every other aspect of society, are organized from dawn to dusk, with wandering around on one’s own generally not permitted even within buildings (except one’s hotel.)  Nonetheless, despite this regimented schedule, there were no lack of spontaneous moments that enabled us to see North Koreans as individuals in their own right.  When telling a cashier at a rest stop, upon being asked, that I was a teacher, she told me that I “have wasted my life…..(I) should have been a film star.” On another night, what was initially meant as a quick introduction to a game of rotating ping pong with our local guides became a lengthy, sweaty, and intensely hysterical competition. After the game, being particularly absent minded, I Ieft behind my camera; I had already done this several times before as North Korea is a particularly easy place to abandon one’s usual regard for potential thieves.  When one of the guides retrieved it and gave it to me, he quite humorously pointed out “a man can become very rich following you around.”

What makes a trip to North Korea so unique and important is to have your assumptions challenged, since there are precious few visitors there, or North Koreans abroad, who can share their outlook. For example, hearing so much about how ‘strict’ the government is and how anti-American its orientation, one might suspect to have an unpleasant grilling by customs officers upon arriving.  Would I be interrogated for having a South Korean stamp in my passport? Would my books and tech devices be confiscated as they might be considered against the regime? To my surprise, probably only Singapore had a quicker, more hassle-free passage through customs. 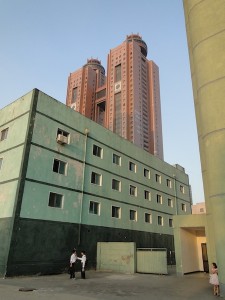 Another interesting observation I couldn’t help but notice is how traditional the society is both with regard to gender stratification as well as the classic Confucion respect for the elderly, no doubt a result of the country’s isolation from the norms of globalization brought by mass media and the lack of opportunities to interact regularly with foreigners. Regarding the latter, I particularly recall when a soldier guiding us to a lookout point at the DMZ was quite impressed and insisted we applaud a fellow 83 year old traveler who was able to climb the steep hill without assistance. Regarding the former, I recall our GX guide Alessandro at a rest stop requesting to drink strawberry milk, but was given coffee instead saying that the strawberry drink is only for girls. Similarly, when I accidentally dropped my shirt in the mud and inquired if there was a nearby sink I could use to wash off the mud, my guide Ms. Kim adamantly insisted I let her clean it because “men are not supposed to wash clothes.” Lastly, when I jokingly wanted my ability to distinguish male from female sculptures of dragons recognized by our guide, he replied that if I was so good at distinguishing the two, I wouldn’t have let a tattoo artist make a female dragon turtle on my leg (though when I explain this is just reflecting a harmonious Yin Yang balance, he mutters something along the line of “touché”.)

What was particularly insightful, though, were the extended conversations afforded to us on our long distance trip to Wonsan, a lovely beach resort town whose laurels I was asked to recount for a producer of a local documentary film. Sometimes these chats simply involved answering our guides’ fascination with our technological devices, such as my ipod or portable Macintosh. But more academic conversations were also more common than I had anticipated, such as when Ms. Kim wished me to summarize the American revolution with notes and diagrams in her notebook (in exchange, of course, for Korean lessons.)  Also of note was when our guides emphatically insisted that I would not be allowed to leave the country until I wrote down the lyrics to the Animaniacs countries of the world song, a rendition of which I frequently was asked to perform at our dinner engagements.

Perhaps most interesting, though, was an extended conversation of politics and economics. Mr. Kim gave a spirited defense of his country’s military first policy, putting the belligerence of its armed forces in the context of the international community’s repeatedly hoping and calling for the downfall of the regime, especially during the famine crisis following the death of Kim Il Sung. While it is hard to imagine a respectable position genuinely defending the human rights abuses perpetrated by the government against its own people, hearing from the perspective of a North Korean directly can help to bring one closer to the complex truth behind many of the governments’ policies.  Of course, despite the English fluency of our guides, cultural misunderstandings can still persist, as when I asked one guide if people are more likely to join political parties from rural or urban areas, it was hard to know if my guide’s deadpan answer “I don’t know – I don’t work for the central statistic committee” was a joke or merely a polite exchange of data. 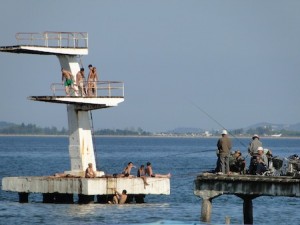 Another fascinating topic of conversation to me, as an economics teacher, was whether or not North Korea will likely copy China’s liberalization, given its close relationship and dependence on China’s aid (the conclusion of the Mass Games this year involved a not so subtle praise of the country’s special relationship with China.) Surprisingly, Mr. Kim said any investment from China comes with “strings attached”, and that while laws concerning potential investment are “still at (a) conceptual phase” with a “newly formed commission addressing these issues”, Mr. Kim felt it was essential not to ignore the environmental damage of economic growth, for “we don’t wear Chinese clothes.”

In short, any day as an American in North Korea is sure to be an immensely rewarding and stimulating experience. While much of the trip involved a decades old itinerary of grand monuments as well as officially sponsored commercial areas or academic institutions (which in no way, though, makes any of these destinations any less fascinating), the real treasures of North Korea are its people, who are generally curious about the outside world and, despite their obvious reluctance to criticize their own government. have the same kaleidoscope of intriguing and genuinely warm personalities as anywhere else in the world.

If you’re interested in finding out about upcoming Reality Tour trips to North Korea, please visit our website.