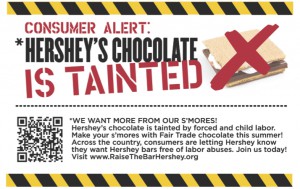 Fair Trade activists are taking the high-tech road to protest Hershey in supermarkets this summer.

In supermarkets across the nation, activists are informing shoppers about the labor violations associated with Hershey’s chocolate products with smartphone-enables “Consumer Alert” cards on the shelves where the chocolate bars can be found.

The ‘Consumer Alerts’ include QR codes, which allow shoppers to take action on their smartphones right in the store as part of a larger campaign, including an online petition on Change.org with over 13,000 supporters.

Summertime is S’mores season, and Hershey’s is using this time to promote their chocolate as an essential ingredient in the S’mores recipe. With National S’mores Day coming up on August 10th, the Raise the Bar, Hershey campaign (comprised of Global Exchange, Green America, and the International Labor Rights Forum) is using this opportunity to let consumers know that they should use Fair Trade chocolate when making s’mores at their summertime event until Hershey’s makes a commitment to ending child labor in its cocoa supply chain by shifting to Fair Trade certified cocoa.

The Raise the Bar, Hershey campaign is encouraging everyone to take to their local supermarket and make a s’mores video. Watch this video and get inspired!

Simple as that! Now, what are you waiting for? Time to tell Hershey’s that We Want More from our S’mores!

Read the Press Release: Consumers Use Smart Phone Codes in Supermarkets to Campaign Against Child Labor in Hershey Bars. 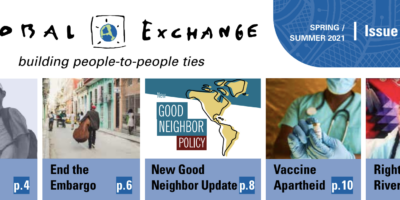 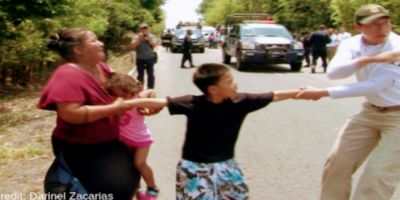