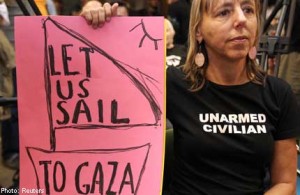 As you may know, I am in Greece with a group of international activists who are trying to set sail on the Freedom Flotilla II to Gaza.  The US boat, the Audacity of Hope, was scheduled to sail last weekend, but we are still anxiously awaiting permission from the Greek government, which is being pressured by Israel and the United States to prevent our departure.

Will you call on the US State Department to stop impeding our mission?

Earlier this week, we learned that the Greek/Norwegian/Swedish boat’s propeller was damaged in port, and yesterday the Irish boat sustained crippling damage to its propeller shaft in a Turkish harbor; both of these incidents are suspected to have been calculated sabotage.  Two other ships have left for the meeting point in international waters, but it is unclear when and whether the other boats will be able to join them.

The goal of the flotilla has always been to shine a light on Israel’s inhumane siege of Gaza, and that, we have already accomplished. The Israeli government has felt so threatened by our little flotilla that it has unleashed its propaganda machine, spies, saboteurs, diplomatic clout, and economic might. We are feeling, in small measure, what the people of Gaza deal with every day. 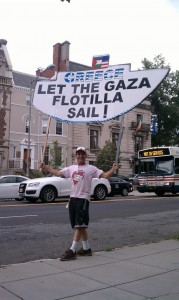 The eyes of the world are on the drama unfolding with the flotilla, and we have massive popular support—except from our own government. The Obama Administration has deemed the flotilla a “provocative act.”  The State Department gave Israel a green light to attack the flotilla under the guise of “self defense,” and issued a specific travel warning against American citizens traveling to Gaza by boat. Senator Kirk (R-Ill.) even suggested yesterday that the US should provide Special Forces for a joint US-Israeli operation to deter the ships from breaking the blockade!

The flotilla participants have been heartened to hear that across the seas, in Washington, DC CODEPINKers set up an overnight vigil at the Greek Embassy to pressure the beleaguered Greek government to allow us to sail.  But we must put the pressure on the true impediments: the US and Israeli governments.  Will you send an email to the US State Department today?

It is time for the US to recognize the illegality and inhumanity of the Gaza blockade, and support the safe passage of the Flotilla.

With gratitude from Greece for your support,
Medea Benjamin

You can hear Medea live from Greece on NPR and DemocracyNow!