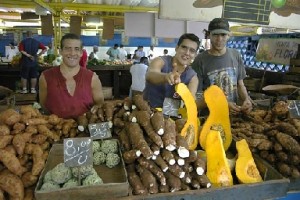 Though many people associate the island of Cuba with rum, tobacco and rumba, one Global Exchange Reality Tour participant discovered that Cubans are also enthusiastic and accomplished organic gardeners and growers.

Linda Slezak, a leader of the Slow Food movement in Glen Cove, New York recently returned from a Global Exchange/Food First research trip to Cuba. Linda described her experience as “the most memorable trip I have ever taken – I am still talking about it to everyone I know.”

We’ve got a similar Cuba trip planned…Global Exchange and Food First will team up again January 12 – 23, 2012 to examine sustainable agriculture practices in Cuba. This time, participants will travel by bus from Havana to the eastern province of Santiago de Cuba and will spend four days getting their hands dirty on Cuban organic farms. Learn more about the trip and how you can join the adventure here.

In the meantime, here’s an article written by Linda Slezak about her recent trip to Cuba, which originally appeared in the Slow Food East End newsletter:

Linda Slezak, Slow Food East End treasurer, recently visited Cuba as part of a Global Exchange Reality Tour group of 17 people from all over the States.

The group spent 10 days learning about the major structural changes that have taken place in Cuban Agriculture since the advent of the “special period”, a euphemistic way of talking about the severe food shortages that took place after the fall of the Soviet Union. Linda provided the following observations about her experiences in Cuba. 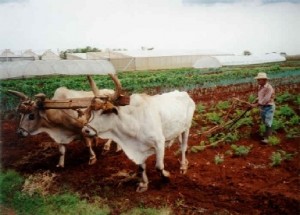 Cuba is a case in point about the unsustainability of monoculture farming. During Colonial times, Cuba was a plantation island providing export crops such as sugar cane, tobacco and coffee. Food crops were largely imported and during the years between 1963 and 1989, chemical fertilizers and pesticides were heavily relied upon for agriculture. It was only due to the losses sustained by not having access to imported food and chemicals to grow their own, that Cuba “went green”.

Going green is another way of saying that Cuba’s agriculture underwent a major overhaul. Land has been redistributed and crops are being cultivated using natural and organic methods with sustainability as the goal. The farmers that we met at both large and small farms (urban and suburban plots are the newest form of community based agriculture) were so proud of their farms and their organic methods.

Most of these farmers have developed their own innovative solutions to their climate and terrain challenges. Raised-bed farming, digging wells for water, terracing and covering fragile crops with black, overhead netting to provide shade are just some of the many solutions the farmers have devised.

Farming cooperatives are another model that helps farmers to share equipment and help each other.   One of the major differences evident here is the support and participation of the government in training, providing land grants and economic incentives to prioritize sustainable agriculture as a country-wide goal.

A phrase that we heard many times was “political will”. The Cuban government displays the political will to create the changes needed for sustainable food production. While still in the beginning stages, people do have enough food and there is food security in the form of government rations for all. Certainly, there is a way to go as all of these changes are relatively new, but since returning from this tour, I have been thinking that with all of the resources that our own country has, the only thing lacking to create food security for our own population is “political will”.

So far, it seems that even in the most unlikely places I travel to, Slow Food has made its mark. There’s an “eco-restaurant” in the Cuban country side called El Romero whose chef and creator Tito Gudas’ wall proudly displays a beautiful hand-crafted snail and a photo of the 2010 Terra Madre Convivium in Turin, Italy. The food, of course, was marvelous. 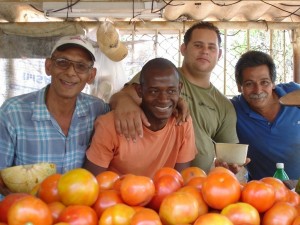