Challenge the Siege on Gaza with the Freedom Flotilla

The following post was originally sent to our News and Action e-mail list. Be the first to get urgent news updates and action alerts by signing up to our e-mail lists. 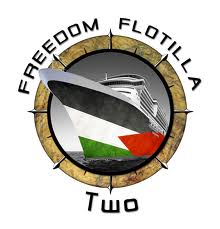 This week, the international Gaza Freedom Flotilla II: “Stay Human” of ten boats will attempt to depart from Cyprus towards Gaza. The mission of the flotilla states, “our destination is Gaza. Our means are non-violent. Our goal is to lift the illegal siege, completely and permanently, and freedom for the Palestinian people.” Most of the boats are carrying much needed humanitarian aid to donate to the people of Gaza. Global Exchange co-founder Medea Benjamin, former U.S. Army colonel, peace activist and Global Exchange board member Ann Wright, 2007 Global Exchange Human Rights Awards recipient Alice Walker and 2003 HRA recipient Kathy Kelly, are on board the US boat, Audacity of Hope, along with 31 other activists and 3 crew.

Gaza is still under siege. According to the United Nations Relief and Works Agency (UNRWA), the U.S.-backed Israeli blockade that is in place, “deliberately impoverishes … and condemns hundreds of thousands of potentially productive people to a life of destitution.” Posted on the website US Boat to Gaza, Medea and other passengers aboard the Audacity of Hope share their stories of why they are going to Gaza.

This weekend Medea posted, “Is Greece Being Blackmailed to Put the Brakes on Gaza Flotilla?” raising questions about political maneuvering to stop the flotilla from leaving Greece together. She writes, “The U.S. passengers speculate that the Obama Administration is using economic blackmail on the Greek government… The United States may well be using its leverage at the IMF over the implementation of an ongoing bailout of European banks with massive Greek debts to compel the Greek government to block the U.S. boat.”

Global Exchange stands behind the Flotilla passengers, and are inviting you to get involved.

The nonviolent movement for a free Palestine has been challenging, empty-handed, one of the most powerful armies in the world. This flotilla is just one in a series of civilian attempts to break the brutal and illegal military siege of Gaza. Thousands of Palestinians and solidarity activists go out to the streets every week to demonstrate peacefully against the Israeli military; thousands have been injured or imprisoned; dozens have been killed. Just this week, six years of nonviolent demonstrations in one little village have succeeded in returning some of the stolen olive grove land to the villagers. We can join this incredible movement by responding to the 2005 call for Boycotts, Divestment and Sanctions on Israel until it abides by International Law and International standards of human rights.

Finally, if you are local in the Bay Area, join us on Thursday June 30, at 7pm, Berkeley City College, 2050 Center Street. 1/2 block from downtown Berkeley BART, for the West Coast premiere of Cultures of Resistance, a documentary showcasing global civil society in using art and culture as a means of resistance, by filmmaker and Freedom Flotilla passenger Iara Lee. Purchase tickets online.