This post was originally sent to the Mexico News updates e-mail list. Be the first to received urgent news and actions from Global Exchange by signing up to our e-mail lists. 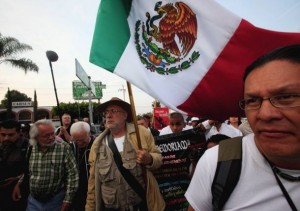 We are sending information on how to watch the extraordinary meeting planned on Thursday, June 23 between Javier Sicilia — together with his close advisors, and a group of family members of drug war victims – with President Calderón and his war cabinet.

This meeting represents a major milestone for the growing anti-war movement in Mexico. It is a moment of opportunity and peril. The opportunity is for the movement to speak directly to the Mexican public about the atrocities inherent in the current drug war model and the urgent need to change it. The peril is that the vast public relations machinery of the presidency could paint the moment to win Calderón points for listening, while ignoring the movement’s challenging call for deep change and reform of Mexico’s failing institutions.

You can view the meeting live at: http://www.milenio.com/portal/tv_live.html
Also view it on TeleSur: http://www.telesurtv.net/secciones/canal/senalenvivo.php
Listen to it on Radio Chinela: http://radiochinelo.mx/ and Radio Centro http://radiocentro.com.mx/grc/la69.nsf/vwAll/APAO-53JQ2Y

Stay with Global Exchange as we continue to provide you with updates and analysis on the growing anti-war movement in Mexico.