Needed: An Antiwar Movement That Puts Peace Over Politicians

By Medea Benjamin and Charles Davis. 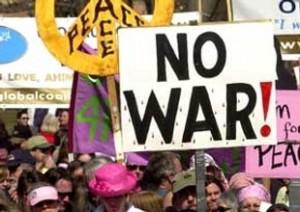 After campaigning as the candidate of change, the man awarded a Nobel Prize for peace has given the world nothing but more war. Yet despite Barack Obama’s continuation – nay, escalation – of the worst aspects of George W. Bush’s foreign policy, including his very own illegal war in Libya, you’d be hard-pressed to find the large-scale protests and outrage from the liberal establishment that characterized his predecessor’s reign (and only seems to pop up when a Republican’s the one dropping the bombs).

That’s not for a lack of things to protest. Since taking office, Obama has doubled the number of troops in Afghanistan and now looks set to break his pledge to begin a significant withdrawal in July. He has unilaterally committed the nation to an unapologetically illegal war in Libya and in two years has authorized more drone strikes in Pakistan than his predecessor authorized in two terms, with one in three of their victims reportedly civilians. In Yemen, he has targeted a U.S. citizen for assassination and approved a cluster bomb strike that, according to Amnesty International, killed 35 innocent women and children.

But these war crimes, which ought to shock the consciences of the president’s liberal supporters, haven’t spurred the sort of popular protest we witnessed under Bush the Lesser. At a recent congressional hearing on the bloated war budget, a handful of CODEPINK activists were the sole dissenters. Thousands poured into the streets to cheer Osama bin Laden’s death, but no Americans were in the streets decrying the drone attack that killed dozens of Pakistani civilians weeks earlier.

While die-hard grassroots peace activists continue to bravely protest U.S. militarism, with 52 people arrested last month protesting outside a nuclear weapons factory in Kansas City – if they’d been Tea Partiers protesting Obamacare, you may have heard of them – there’s no denying that the peace movement has taken a beating.

The question is, why? Part of the reason is the financial crisis. It’s hard to protest war when the bank’s foreclosing on your house. And it’s hard to find money for a trip to Washington, DC, when, like 14 million Americans, you’re unemployed.

War has also become normal – routine, boring – to many Americans, with U.S. troops stationed for nearly ten years in Afghanistan and eight in Iraq. And after the first volley of smart bombs, wars are barely covered by the media, eclipsed by the latest scandal involving a politician’s privates. Beyond apathy, many who once took to the street may now no longer see the value of protest in the face of the enormous power of the military-industrial complex.

But a recent study suggests that a major reason why the antiwar movement has withered even as the warfare state has grown is simply that the party in charge has changed.

After surveying 5,398 demonstrators between 2007 to 2009, the University of Michigan’s Michael T. Heaney and Indiana University’s Fabio Rojas found that prior to Obama’s election, up to 54 percent of antiwar protesters were self-described Democrats. After his inauguration, that number fell to less than a quarter.

Instead of continuing the hard work of organizing and protesting unjust wars, too many people took the election of politicians with “D”s after their name as their own Mission Accomplished. Instead of continuing direct action, too many were content voting for “their” team and calling it a day, never mind the policies those they voted into office continued once in power.

It’s worth recounting just how Democrats have rewarded their antiwar supporters. In 2006, riding public anger over the war in Iraq to take back control of the House for the first time in a dozen years, Democrats had a mandate for change – and then turned around and consistently funded the war they claimed to oppose. The most congressional Democrats have done is offer a resolution requesting a “plan” for ending the war in Afghanistan, all the while dutifully approving the funds to fight it.

We know how Obama has governed after likewise cynically riding antiwar sentiment into the White House.

Once casting themselves as brave opponents of the warfare state, many Democrats have rejected their rhetorical support for peace just as thoroughly as their once-upon-a-time opposition to the Patriot Act. When Ohio Congressman Dennis Kucinich offered a measure condemning Obama’s illegal, undeclared war in Libya and demanding a withdrawal of all U.S. forces within two weeks, he was joined by more Republicans than he was his fellow Democrats. Nancy Pelosi, channeling every right-winger during the Bush years, even claimed lawmakers who opposed the president’s unilateral war policy would send the “wrong message” to the U.S.’s NATO allies. The former speaker of the House is seemingly more concerned about hurt feelings than dead civilians, taxpayer money or the Constitution.

Even the recent House vote to block the president from spending funds “in contravention of the War Powers Act” – meaning Libya – received more votes from Republicans than Democrats. Who says elections don’t change anything?

Democratic voters who genuinely believe in peace should know that ending the U.S.’s addiction to war requires more than spending a few minutes in the ballot box. The only change voting has brought in recent years is the party approving the money for war and the name of the president requesting it.

If voting isn’t changing things – and it’s not – it’s time we considered changing our tactics.

Obama, after all, whose campaign cast him as the most peaceful of the major party candidates, has committed acts of war in no less than half-a-dozen countries (that we know about): Iraq, Afghanistan, Pakistan, Libya, Yemen and Somalia. Under Obama, the U.S. aids and abets Israeli war crimes to the tune of more than $3 billion a year in military aid, all while vigorously fighting international attempts to hold accountable those responsible for the slaughter of civilians in Gaza. And Guantanamo Bay? Still open.

But Obama has done more than disappoint the antiwar movement: he’s actively attacked it, using the power of the state to harass and intimidate peace activists, 23 of whom have had their homes and offices raided by the FBI. The pretense? That a group of pacifists may have provided “material support” to terrorists, a charge so slippery and ill-defined that the ACLU warns it can include a conversation on the need to embrace non-violence.

More war and the threat of prosecution to intimidate those who oppose these wars – or expose them, in the case of alleged WikiLeaks whistle-blower Bradley Manning: that’s what Obama’s election has wrought. Was his rise to power really such a progressive victory?

Occasional rhetorical flourishes aside, Democrats and Republicans reliably back the killing of poor people on the other side of the globe in the name of “regional stability” and perceived U.S. national (read: corporate) interests. As they’ve made painstakingly clear over the years, neither is a friend of peace, especially when one of their own is making war.

If change is to come to U.S. foreign policy, it won’t be thanks to any politician, but to direct action and organizing of the sort that won African Americans and other minorities their civil rights. We already have public opinion on our side — 2/3 of Americans consistently say they want to get out of the wars. We now have to make the voice of the silent majority heard.

Rather than devoting time, money and energy into electing politicians who will betray the values of peace, we should organize and energize a new peace movement that values direct action over access to power; real and lasting peace over disingenuous politicians. Instead of waiting – and waiting – for politicians to buck party and power, we should make alliances with labor activists, environmentalists and advocates for the poor who have some pretty good ideas on protest and civil disobedience – and on what to do with the $2 billion the U.S. government wastes every week on the Afghan war alone. If we build a strong enough movement, politicians will figure out which way the wind is blowing.