Take Action: Stand up with the youth! 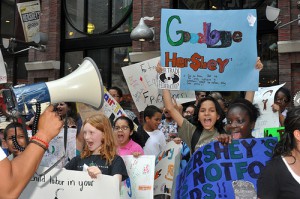 We recently shared a quick report back from last week’s Hershey rally in Times Square in a blog post full of links to photos and quotes from the energizing day.

Now we want you to see for yourself what an extraordinary sight it was, with 2-300 people, mostly K-12 students, standing up for the rights of youth on the other side of the globe. It was a profoundly embarrassing moment for Hershey, when hundreds of youth – the demographic that much of the company’s products and merchandising caters to – came to Hershey’s own front doorstep carrying signs, shouting chants, and calling Hershey out in public for using child labor in the cocoa fields.

Check out the incredible youth energy on this 15-second video, + more at http://www.youtube.com/raisethebarhershey.

The rally was an extraordinary success. First to arrive at the scene were 5th grade students from Manhattan’s Lower East Side. Fired up and ready to go, these 11-year-olds grabbed hold of the megaphone, initiating the chanting and marching outside the Hershey Store for the next few hours. Moments later, students from New York and New Jersey high schools arrived and began chanting and dancing along the streets, calling on Hershey to go Fair Trade.

Members of the coordinating organizations and a countless number of the thousands of locals and tourists that constantly throng Times Square joined the protest, grabbed signs to enthusiastically hold high, picked up informational flyers, signed petitions, and participated in the call-in action to Hershey. The turnout to hold Hershey accountable for failure to eliminate child labor from its supply chain was so huge that there wasn’t enough space in front of the Hershey Store and we completely filled the sidewalks on both sides of the street as well as the adjacent loading zone, but that only made our chants louder! Anyone who drove between the two massive groups on Broadway, the major thoroughfare through Times Square, heard our cries for justice reverberating in their cars.

Another amazing speaker in attendance was human rights advocate, Kerry Kennedy as she addressed the crowd and repeated what we all know: “There’s nothing sweet about child labor.” Watch the video of her speaking for yourself and do us a favor and stand up with the youth by spreading this video around to your networks and spreading the word about Fair Trade.

Only you can ensure that the message of these youth reaches out across the internet, educating millions of people and resulting in real change.

Let’s show Hershey that we will not back down. We will continue to urge Hershey and other chocolate companies to end their abuses in the cocoa industry.

Thanks and congratulations to each of you who helped make the rally a success, whether you came to the rally, forwarded an invitation to folks in New York (MANY participants heard about the rally through your forwarded emails, Facebook, etc), participated in the call-in action, etc. Your dedication to the Raise the Bar Hershey Campaign is an inspiration to us all.

The chant at the end? “Hershey, make your chocolate fair, or we’ll be back here in Times Square.”

—-
Got $5 to spare? Make a contribution for the next rally!