We wrote last week about Federal Police breaking into the Paso del Norte Human Rights Center in Ciudad Juárez, an important host of the Caravan for Peace that was travelling 3,000 kilometers north to Juárez through cities hard hit by the drug war like Morelia, San Luis Potosi, Torreon, and Monterrey.

Many people wrote to U.S. officials about this atrocious break-in. The State Department response of privately expressing concerns to Mexican officials and publicly praising the spirit (though not the demilitarizing goals) of the caravan would not have happened without pressure. The Caravan arrived safely in Juárez last Thursday. 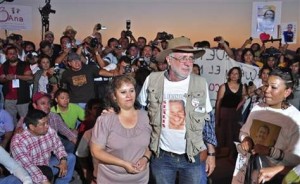 The Caravan Arrives In Juárez

I met the Caravan on the outskirts of Juárez on Thursday evening as part of a noisy and expectant crowd of hundreds that swelled into more than a thousand as we waited hours in the sun and then descending darkness to welcome the 20 some buses and dozens of cars that had joined in. The caravan was late — mostly due to making repeated stops to speak with large groups of people who spontaneously organized to show their solidarity and give testimony along the route.

As you can see in the news reports we linked in the first paragraph, stories of pain, death, and victimization were a constant in all the meetings along the way. The leaders of the caravan, including Javier Sicilia, who was honored and spoke in San Francisco just days before at the Global Exchange Human Rights Awards Ceremony, listened and made careful note of the chillingly similar stories of brutality and impunity including horrors inflicted by army, police, criminals, and others. 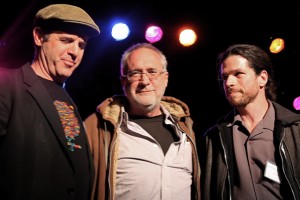 What impressed me the most about the arrival of the Caravan in Juárez that night was the response it elicited from ordinary residents, shopkeepers, truck drivers, and others along the usually abandoned and eerily quiet streets of Juárez. Instead of spending evenings inside shuttered houses and behind multiple gates and padlocks as residents of Juárez have become accustomed to doing in recent times, people surged into the streets; whole families clustered on street corners at 10 PM to join smiling citizens who stopped to wave and in some cases, hold up handmade signs of welcome. The mood was infectious and spirits remained high even as a vast welcoming crowd in Villas de Salvarcar — a neighborhood shaken in 2010 by one of the war’s worst massacres – listened to a series of speeches and testimonies that lasted until one in the morning. 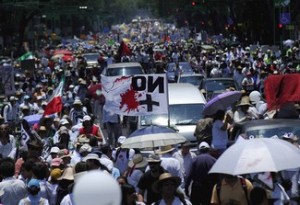 On Friday morning, movement organizers met again on the campus of the University of Juárez. The aim was to discuss and clarify the goals of the movement, as well as to propose concrete steps for further action to build the movement and challenge the failed drug war strategy and its supporters on both sides of the border. The results of these meetings included calls for drug policy reform, ending the Merida Initiative, pressuring the U.S. to take measure to end gun trafficking, and to end the dangerous militarization of a public security. In the wake of the meetings, some tactical and other disagreements over emphasis have emerged, giving this powerful and morally grounded movement some difficult growing pains.

Global Exchange is supporting a number of campaigns to end gun trafficking, challenge the U.S. to get serious about drug policy reform (this week marks the 40th anniversary of Richard Nixon’s launching of the drug war in 1971), and end the Merida Initiative. Please check out the links in this paragraph for more information.

On Saturday, movement organizers crossed the border to headline a rally and multiple press conferences in El Paso, Texas. One of the most notable events of that day was the announcement that Cipriana Jurado Herrera had been granted political asylum in the United States — which she had sought based on her mistreatment at the hands of the Mexican Army. The granting of her petition, which exposes the routine abuses of the Mexican military, is unprecedented. 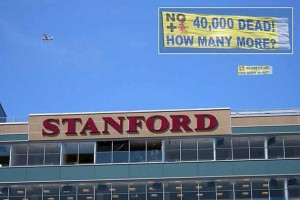 Protest from the Air

On Sunday, far away in California, another event that shows the growing reach of Mexico’s peace movement took place. A small plane pulling a banner with the now familiar logo of the No Más Sangre (No More Blood) movement saying “40,000 Dead! How Many More?” passed above Stanford Stadium where Mexican President, Felipe Calderón, was about to give the commencement address to the graduating class of 2011. The fly over, which lasted for 15 minutes of the president’s 18 minute speech, was barely mentioned in U.S. publications, but created a firestorm of TV and front page news coverage across Mexico, where public challenges to the President are rare.

Articles and cartoons generated in the wake of the action are documented on this excellent Facebook page. This homemade video clip of the action has been posted widely and has already been viewed tens of thousand of times.

We will continue to update you on this growing peace movement in Mexico, and encourage you to sign our petition encouraging the Obama Administration to put an end to the Merida Initiative.