What Happened at the Move Over AIPAC Conference? 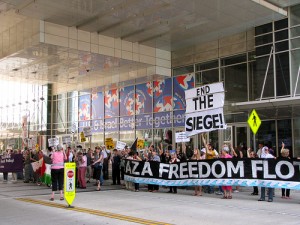 CODEPINK: Women for Peace , Global Exchange, Interfaith Peace-builders, and the Fellowship of Reconciliation, together with over 100 peace and justice groups, organized the Move Over AIPAC conference that took place in Washington, DC on May 22-24, 2011. The purpose; to expose the AIPAC (American Israel Public Affairs Committee) lobby and build the vision for a new US foreign policy in the Middle East. 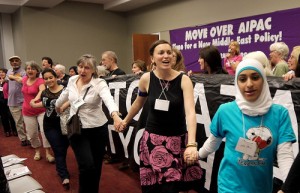 CODEPINK’s Medea, Shaden, Alli, Sasha, Rae, Tighe, and the Move Over AIPAC Team summed up the events that took place during this 3 day conference: 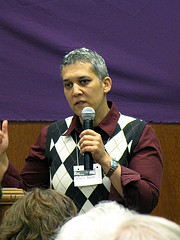 Dalit Baum, Global Exchange’s Economic Activism for Palestine Director, attended the Move Over AIPAC conference and had this to share:

For me, it was striking to see first-hand the hordes of well-dressed people coming into the AIPAC gala event from hundreds of buses. More and more of them: congressmen, African American community organizers, business people, Jewish youth from all around –  so many –

Speaking to whomever we could, there was even one open-mike session when demonstrators invited the AIPACers to come on stage and speak to us. Again and again, I saw in these conversations such total blinded ignorance about the fate of the country they claim to support, about the implications of sending more and more free weapons to Israel. I also encountered a lot of polite racism and Islamophobia – most of the well dressed gala guests who spoke with me would not listen to anything a Palestinian says; they dismissed all accounts of human rights violations, imprisonment, torture, checkpoints, land grab etc. as an anti-Semitic fabrication. It was very different then similar arguments in Israel, where people are mostly aware of the facts, but they try and justify the crimes by “security”.

I was amazed by the courage of Rae and the rest of our friends who went into the gala and then into Congress to confront Netanyahu’s speech. If it weren’t for them, all left on record would have been the 29 standing ovations and outpouring of unconditional US support to one of Israel’s most hawkish, neo-liberal and racist governments. The protesters inside had to deal with the most brutally violent, sexist and hateful elements among the well dressed AIPACers, and they had to face this violence alone. I am very grateful for their courage. 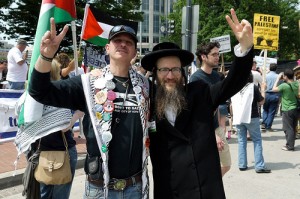 More On the Move Over AIPAC Conference