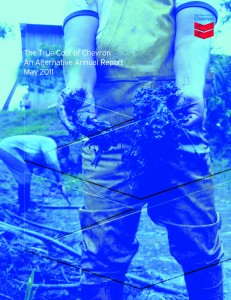 Cover of True Cost of Chevron: An Alternative Annual Report

Last night I participated in an incredible event. One dozen community leaders from areas harmed by Chevron’s operations and experts from leading advocacy organizations traveled from all corners of the globe to come together as The True Cost of Chevron Network.

We exposed not only Chevron’s abuses, but also the incredible and powerful united front formed to take on the oil giant. Audience members attending the True Cost of Chevron Public Teach-in were crying, cheering, listening intently and ready to take action. 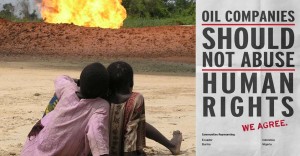 One of the 2011 True Cost of Chevron Ads

CEO John Watson opened Chevron’s 2010 Annual Report by telling the corporation’s stockholders that “2010 was an outstanding year for Chevron.”

The communities who bear the costs of Chevron’s operations do not agree.

These communities have seen Chevron continue its long history of human rights violations, ignore longstanding decisions of Indigenous communities, destroy livelihoods, and convert dollars into unjust political influence in the United States and around the world.

This is why dozens of activists, including those from Angola, Nigeria, Canada, Alaska, and the U.S. Gulf Coast have traveled to San Ramon, California to attend Chevron’s annual shareholder meeting to deliver this new report: The True Cost of Chevron: An Alternative Annual Report.

The report – being released to the public today – includes accounts by more than 40 authors and records egregious corporate behavior in locations as diverse as California, Burma, Colombia, Ecuador, Kazakhstan, Nigeria, the Philippines and the U.S. Gulf Coast, including new sections detailing Chevron’s pursuit of ever-riskier and ever-deeper offshore projects in the South China Sea, the North Sea, and the Canadian Arctic and its role in the Deepwater Horizon disaster. The report also profiles the historic victory and ongoing battle over Chevron’s crimes in Ecuador. 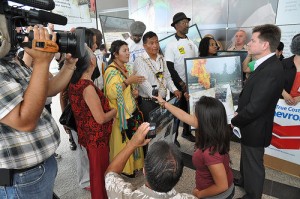 Get your report today. Download the report, or make a $15 contribution to Global Exchange to receive a hard copy of the book.

In the Bay Area? Join the True Cost of Chevron Network to take on Chevron at their annual shareholder meeting tomorrow, May 25th. We will come together to fight back against the dire impacts of Chevron’s reckless pursuit of profits. Join us for a colorful and fun rally outside Chevron’s headquarters in support of those dozens of community leaders who will go into the meeting to demand human rights, environmental, economic and climate justice, and more.

Can’t make it to the protest? Follow updates right here on our Chevron Program blog, the Chevron Program Facebook page, and on Twitter. Also see the 2011 True Cost of Chevron Ads.