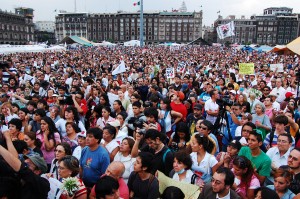 Mexico’s weekend of mobilizations against the drug war stretched from Ciudad Juárez to San Cristóbal. Javier Sicilia, who called for these actions, led a hundred thousand supporters into Mexico City’s Zocalo on Sunday after marching three days from Cuenavaca.

The actions reveal a sea change in Mexican public opinion and have forced open a new national dialogue in Mexico while making headlines and inspiring support actions around the world.

The looming question is: What now? How can this dynamic new movement sustain and build the momentum for change? If you are in the Bay Area, here are three ways you can be involved in that conversation during the next month:

Hope to see you at these events.