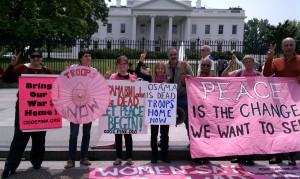 The following originally appeared on our sister organization CODEPINK’s website and was written by CODEPINK/Global Exchange Co-founder Medea Benjamin:

There was never any justification for invading Iraq. Our troops must come home now—all of them.

With Al-Qaeda driven out of Afghanistan and Osama Bin Laden dead, there is no justification for continuing the war in Afghanistan. Our soldiers—and contractors—must leave, now, opening the path for Afghan government and the Taliban to negotiate a ceasefire.

Our drone attacks in Pakistan are only fueling the violence and creating more Osama Bin Ladens. We must stop these barbaric attacks, now!

Our military, and our federal budget, must focus on rebuilding at home, not making new enemies abroad. Let us give meaning to the death of Osama Bin Laden by calling on President Obama to put an end to the violence.

Make your voice heard. Visit the CODEPINK website to send a letter or make a phone call to President Obama asking him to “Let the Peace Begin.”