“No lobby has managed to divert U.S. foreign policy as far from the American national interest… while simultaneously convincing Americans that U.S. and Israeli interests are essentially identical.” – John Mearsheimer and Stephen Walt, authors of The Israel Lobby, keynote speakers at Move Over AIPAC gathering May 21-24 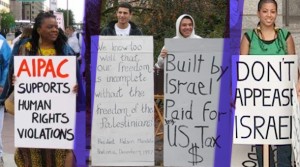 From May 21 to 24, 2011, in Washington DC, join Global Exchange, CODEPINK, the US Campaign to End the Israeli Occupation and a coalition of over 100 organizations at the historic gathering to Move Over AIPAC and building a New US Middle East Policy!

Move Over AIPAC is timed to coincide with the annual policy meeting of AIPAC, which will feature Israeli Prime Minister Netanyahu, members of the Obama administration and hundreds of members of Congress. The gathering will expose AIPAC’s negative influence on U.S. foreign policy and promote an alternative approach that respects the rights of all people in the region.

There will be trainings, workshops, press conferences, book signings, cultural events, and culminate with peaceful, creative protests outside the AIPAC convention itself.

Still need some convincing? Read blog posts from CODEPINK’s Rae Abileah and Holocaust survivor, Hedy Epstein on why they are going to Move Over AIPAC.

Register today to join us in DC! Plus, sign up here and RSVP on facebook. Spaces are limited and will fill up quickly, so sign up today! The cost for the summit is a modest $50-100, and only $20 for students and low-income. All other actions and events are FREE.

We have a growing scholarship fund to support travel costs for students. You can apply for a scholarship or find out more here.

If you can’t come, please help students attend by donating to the scholarship fund.