Speaking Out at the BP Annual Meeting 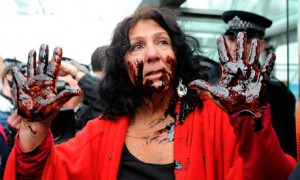 Gulf Coast activists showed up at BP’s annual shareholder meeting in London today to speak out against the oil company that is responsible for what is known as the largest oil spill in U.S. history. Despite having proxies and all necessary credentials to attend the meeting, almost all of the Gulf Coast residents were denied entry.

One activist, Global Exchange’s Energy Program Director, Antonia Juhasz was one of the few that made it into the meeting and was able to speak on behalf of the Gulf Coast residents who have since had their lives destroyed since last year’s Deepwater Horizon explosion.

The most heated moment in today’s BP annual shareholder meeting occurred when Antonia Juhasz, took to the mic and confronted BP executives, Chairman of the Board Svanberg and the new CEO Bob Dudley about BP’s ongoing harmful actions in the Gulf, including the corporation’s lack of adherence to the moral, legal and financial obligations to the Gulf and its residents.

Antonia had a few words to share after the meeting:

I was shocked that BP denied residents from the Gulf of Mexico access today to their annual shareholder meeting in London. The residents and victims of the Gulf oil disaster were all legitimate proxy holders and had traveled at great cost to be there. They tried to deny my shareholder rights as well by only permitting me entrance as a guest, without the right to speak or vote. I spoke out anyway.

I demanded an immediate response to BP’s denying the voice of those that had traveled from the Gulf to tell the truth about what has really been happening to their health, livelihoods and home. I also demanded a response to the failure of the corporation to provide for the safety of its deep water operations and read a statement that Keith Jones, whose son, Gordon Jones, was killed when the Deepwater Horizon exploded, gave to me and asked me to read.

The Gulf Coast Fund, the organization that sponsored the residents’ travel to London released a statement of their own about the five Gulf residents that were denied entry. Tracy Kuhns, Director of Louisiana Bayoukeeper spoke out,

“We aren’t here to cause trouble. We came to deliver the message that BP needs to take responsibility for the drilling disaster. The oil is not gone… BP must be held accountable.”

Stay tuned to Global Exchange’s page on the BP Disaster for news updates about the shareholder meeting and Antonia Juhasz’ upcoming book, Black Tide: the Devastating Impact of the Gulf Oil Spill, set to be released a few days before the one-year anniversary of the Deepwater Horizon explosion.

In the meantime, you can see a clip of Antonia telling the BBC in front of the BP shareholder meeting that the ‘Gulf spill is not resolved’. 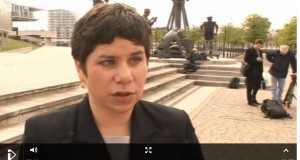 Coverage from The Independent:

More on the Energy Program site where you can also read statements by Gulf Coast residents intended to be shared with BP shareholders and executives. 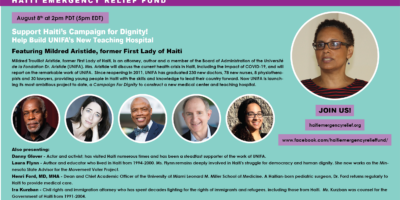