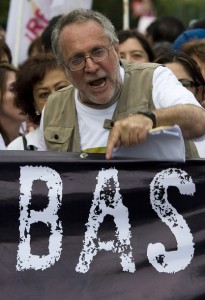 Thousands of people marched in Mexico this week demanding an end to the violence that continues to wrack the country.

This time, Cuernavaca, the so-called city of eternal spring, was the epicenter of protests by thousands of Mexicans that sprang up in the wake of the murders of seven youths, including 24 year old Juan Francisco Sicilia, whose father, Javier Sicilia, is a well known journalist and poet. Javier Sicilia has made his paternal grief public, giving voice to sentiments shared by countless other bereaved Mexicans.

The discovery of fresh mass graves near the U.S. Border (close to where the bodies of 76 murdered Central American migrants were discovered last year) added to the urgency of protests in several cities by a new anti-violence coalition that now includes growing numbers of Mexico’s middle class — a sector that has traditionally been politically timid.

Prior to this week’s marches, Javier Sicilia met with President Calderón who is seen by many as the intellectual author of Mexico’s drug war tragedy. Sicilia came away from those meetings unconvinced by the President’s strategy and stirred new controversy by suggesting that it was time to make a pact with the powerful criminal cartels responsible for most of the killings.

As this first hand account from Cuernavaca, where the largest of the recent marches were held, conveys the sense that the growing movement against murder in Mexico is gathering force and will not be easily silenced.

Stay tuned for updates and action request as well as information on a nationwide fall speaking tour this fall by authors Diego Osorno and John Gibler. Osorno writes for Mexico’s Milienio newspaper and recently published a best selling book on the Sinaloa Cartel. Gibler, who has spent the past two years reporting from the frontlines of the drug war, will be publishing a book on the drug war this summer. If you are interested in hosting them, please contact: ted@globalexchange.org.