Instead of Bombing Dictators, Stop Selling Them Bombs

By Medea Benjamin and Charles Davis 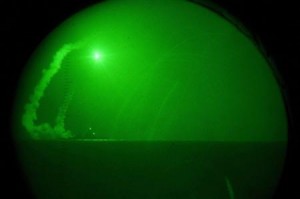 When all you have is bombs, everything starts to look like a target. And so after years of providing Libya’s dictator with the weapons he’s been using against the people, all the international community – France, Britain and the United States – has to offer the people of Libya is more bombs, this time dropped from the sky rather than delivered in a box to Muammar Gaddafi’s palace.

If the bitter lesson of Iraq and Afghanistan has taught us anything, though, it’s that wars of liberation exact a deadly toll on those they purportedly liberate – and that democracy doesn’t come on the back of a Tomahawk missile.

President Barack Obama announced his latest peace-through-bombs initiative last week — joining ongoing U.S. conflicts and proxy wars in Iraq, Afghanistan, Pakistan, Yemen and Somalia — by declaring he could not “stand idly by when a tyrant tells his people that there will be no mercy, and … where innocent men and women face brutality and death at the hands of their own government.”

Within 24 hours of the announcement, more than 110 U.S. Tomahawk cruise missiles were fired into Libya, including the capital Tripoli, reportedly killing dozens of innocent civilians — as missiles, even the “smart” kind, are wont to do. According to The New York Times, allied warplanes with “brutal efficiency” bombed “tanks, missile launches and civilian cars, leaving a smoldering trail of wreckage that stretched for miles.”

“[M]any of the tanks seemed to have been retreating,” the paper reported. That’s the reality of the no-fly zone and the mission creep that started the moment it was enacted: bombing civilians and massacring retreating troops. And like any other war, it’s not pretty.

While much of the media presents an unquestioning, sanitized version of the war — cable news hosts more focused on interviewing retired generals about America’s fancy killing machines than the actual, bloody facts on the ground — the truth is that wars, even liberal-minded “humanitarian” ones, entail destroying people and places. Though cloaked in altruism that would be more believable were we dealing with monasteries, not nation-states, the war in Libya is no different. And innocents pay the price.

If protecting civilians from evil dictators was the goal, though — as opposed to, say, safeguarding natural resources and the investments of major oil companies — there’s an easier, safer way than aerial bombardment for the U.S. and its allies to consider: simply stop arming and propping up evil dictators. After all, Libya’s Muammar Gaddafi reaped the benefits from Western nations all too eager to cozy up to and rehabilitate the image of a dictator with oil, with those denouncing him today as a murderous tyrant just a matter of weeks ago selling him the very arms his regime has been using to suppress the rebellion against it. 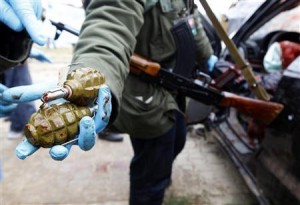 In 2009 alone, European governments — including Britain and France — sold Libya more than $470 million worth of weapons, including fighter jets, guns and bombs. And before it started calling for regime change, the Obama administration was working to provide the Libyan dictator another $77 million in weapons, on top of the $17 million it provided in 2009 and the $46 million the Bush administration provided in 2008.

Meanwhile, for dictatorial regimes in Yemen, Bahrain and Saudi Arabia, U.S. support continues to this day. On Saturday, Secretary of State Hillary Clinton even gave the U.S. stamp of approval to the brutal crackdown on protesters in Bahrain, saying the country’s authoritarian rulers “obviously” had the “sovereign right” to invite troops from Saudi Arabia to occupy their country and carry out human rights abuses, including attacks on injured protesters as they lay in their hospital beds.

In Yemen, which has received more than $300 million in military aid from the U.S. over the last five years, the Obama administration continues to support corrupt thug and president-for-life Ali Abdullah Saleh, who recently ordered a massacre of more than 50 of his own citizens who dared protest his rule. And this support has allowed the U.S. can carry out its own massacres under the auspices of the war on terror, with one American bombing raid last year taking out 41 Yemeni civilians, including 14 women and 21 children, according to Amnesty International.

Rather than engage in cruise missile liberalism, Obama could save lives by immediately ending support for these brutal regimes. But for U.S. administrations, both Democratic and Republican, arms sales appear to trump liberation. The Stockholm International Peace Research Institute documented that Washington accounted for 54 percent of arms sales to Persian Gulf states between 2005 and 2009.

Last September, the Financial Times reported that the U.S. had struck deals to provide Saudi Arabia, the United Arab Emirates, Kuwait and Oman with $123 billion worth of arms. The repressive monarchy of Saudi Arabia accounts for over half that figure, with it set to receive $67 billion worth of weapons, including 84 F-15 jets, 70 Apache gunships, 72 Black Hawk helicopters, 36 light helicopters and thousands of laser-guided smart bombs – the largest weapons deal in U.S. history.

Instead of forking over $150 million a day to the weapons industry to attack Libya or selling $67 billion in weapons to the Saudis so they can repress not just their own people, but those of Bahrain, we – the ones being asked to forgo Social Security to help pay for empire – should demand those who purport to represent us in Washington stop arming dictators in our name. That might drain some bucks from the merchants of death, but it would give non-violent protesters throughout the Middle East a fighting chance to liberate themselves.

The U.S. government need not drop a single bomb in the Middle East to help liberate oppressed people. All it need do is stop selling bombs to their oppressors.