This opinion piece was also posted on Al Jazeera English and The Huffington Post.

By Medea Benjamin and Charles Davis. 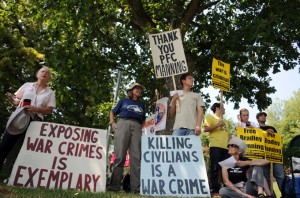 Bradley Manning is accused of humiliating the political establishment by revealing the complicity of top US officials in carrying out and covering up war crimes. In return for his act of conscience, the US government is torturing him, humiliating him and trying to keep him behind bars for life.

The lesson is clear, and soldiers take note: You’re better off committing a war crime than exposing one.

An Army intelligence officer stationed in Kuwait, the 23-year-old Manning – outraged at what he saw – allegedly leaked tens of thousands of State Department cables to the whistle-blowing website WikiLeaks. These cables – cables that show US officials covering up everything from child rape in Afghanistan to an illegal, unauthorised bombing in Yemen.

Manning is also accused of leaking video evidence of US pilots gunning down more than a dozen Iraqis in Baghdad, including two Reuters journalists – and then killing a man who stopped to help them. The two young children of the passerby were also severely wounded.

“Well, it’s their fault for bringing kids into a battle,” a not-terribly-remorseful US pilot can be heard remarking in the July 2007 “Collateral Murder” video.

None of the soldiers who carried out that war crime have been punished, nor have any of the high-ranking officials who authorised it. And that’s par for the course. Indeed, committing war crimes is more likely to get a soldier a medal than a prison term. And authorising them? Well, that’ll get you a book deal and a six-digit speaking fee. Just ask George W Bush. Or Dick Cheney, Donald Rumsfeld or Condoleezza Rice. Or the inexplicably “respectable” Colin Powell.

In fact, the record indicates Manning would today be far better off if he’d killed those men in Baghdad himself – and on the lecture circuit, rather than in solitary confinement.

Hyperbole? Consider what happened to the US soldiers who, over a period of hours – not minutes – went house to house in the Iraqi town of Haditha and executed 24 men, women and children in retaliation for a roadside bombing.

“I watched them shoot my grandfather, first in the chest and then in the head,” said one of the two surviving eyewitnesses to the massacre, nine-year-old Eman Waleed.

“Then they killed my granny.”

The relative value of life

Almost five years later, not one of the men involved in the incident is behind bars. And despite an Army investigation revealing that statements made by the chain of command suggest they “believe Iraqi civilian lives are not as important as US lives”, with the murder of brown-skinned innocents considered “just the cost of doing business” – a direct quote from Maj Gen Eldon Bargewell’s 2006 investigation into the killings – none of their superiors are behind bars either.

Now consider the treatment of Bradley Manning. On March 1, 2011, the military charged Manning with 22 additional offenses – on top of the original charges of improperly leaking classified information, disobeying an order and general misconduct. One of the new charges, “aiding the enemy”, is punishable by death. That means Manning faces the prospect of being executed or spending his life in prison for exposing the ugly truth about the US empire.

Meanwhile, the Obama administration has decided to make Manning’s pre-trial existence as torturous as possible, holding him in solitary confinement for 23 hours a day since his arrested ten months ago – treatment which Psychologists for Social Responsibility notes is, “at the very least, a form of cruel, unusual and inhumane treatment in violation of US law”.

In addition to the horror of long-term solitary confinement, Manning is barred from exercising in his cell and is denied bed sheets or a pillow. And every five minutes, he must respond in the affirmative when asked by a guard if he’s “okay”.

While others sleep soundly

It gets worse. On his blog, Manning’s military lawyer, Lt Col David Coombs, reveals his client is now stripped of his clothing at night, left naked under careful surveillance for seven hours, and, when the 5:00am wake-up call comes, he’s then “forced to stand naked at the front of the cell”.

If you point out that the emperor has no clothes, it seems the empire will make sure you have none either.

Officials at the Quantico Marine Base where Manning is being held claim the move is “not punitive”, according to Coombs. Rather, it is for Manning’s own good – a “precautionary measure” intended to prevent him from harming himself. Do they really think Manning is going to strangle himself with his underwear – and that he could do so while under 24-hour surveillance?

“Is this Quantico or Abu Ghraib?” asked US Representative Dennis Kucinich. Good question, congressman. Like the men imprisoned in former President Bush’s Iraqi torture chamber, Manning is being abused and humiliated – despite having not so much as been tried in a military tribunal, much less convicted of an actual crime.

So much for the presidential term of the candidate of hope and change.

Administrations change, much remains the same

Remember back when Obama campaigned against such Bush-league torture tactics? Recall when candidate Obama said “government whistleblowers are part of a healthy democracy and must be protected from reprisal”? It appears his opposition to torture and support for whistleblowers was mere rhetoric. And then he took office.

Indeed, despite the grand promises and soaring oratory, Obama’s treatment of Manning is starkly reminiscent of none other than Richard Nixon.

Like Obama – who has prosecuted more whistleblowers than any president in history – Nixon had no sympathy for “snitches”, and no interest in the US public learning the truth about their government. And he likewise argued that Daniel Ellsberg, the leaker of the Pentagon Papers, had given “aid and comfort to the enemy” for revealing the facts about the war in Vietnam.

But there’s a difference. Richard Nixon never had the heroic whistleblower of his day thrown in solitary confinement and tortured. If only the same could be said for Barack Obama.

Medea Benjamin is cofounder of Global Exchange and CODEPINK: Women for Peace. Charles Davis is an independent journalist. On March 20 CODEPINK and others will be traveling to the Quantico Marine Base to rally in support of Bradley Manning. You can sign our petition here asking President Obama to pardon Bradley Manning.