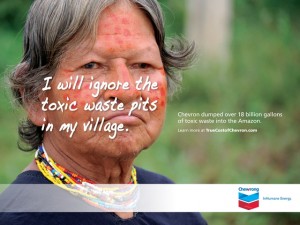 February 14th is a date usually associated with chocolate, flowers and the exchange of Valentine cards. But this February 14th is special, one that now marks the day when a historic verdict was passed down by the Ecuador court against Chevron.

Today, a judge in the Ecuadorian Amazon ruled that Chevron was responsible for polluting the Ecuadorean jungle and ordered Chevron to pay more than $9 billion in damages.

This ruling is in favor of the residents of Ecuador’s Amazon region who have spent the last 18 years seeking damages for crude oil pollution. Chevron has denied the allegations of environmental damage.

From San Francisco to New York and the UK, news is spreading fast about this momentous verdict.

Our friends at Amazon Watch and Rainforest Action Network had this to say about the ruling in a joint statement released earlier today:

As of today, Chevron’s guilt for extensive oil contamination in the Amazon rainforest is official. It is time Chevron takes responsibility for these environmental and public health damages, which they have fought for the past 18 years.

Today’s ruling in Ecuador against Chevron proves overwhelmingly that the oil giant is responsible for billions (of) gallons of highly toxic waste sludge deliberately dumped into local streams and rivers, which thousands depend on for drinking, bathing, and fishing.

Chevron has spent the last 18 years waging unprecedented public relations and lobbying campaigns to avoid cleaning up the environmental and public health catastrophe it left in the Amazon rainforest. Today’s guilty verdict sends a loud and clear message: It is time Chevron clean up its disastrous mess in Ecuador.

Today’s case is historic and unprecedented. It is the first time Indigenous people have sued a multinational corporation in the country where the crime was committed and won.

Today’s historic ruling against Chevron is a testament to the strength of the Ecuadorian people who have spent 18 years bringing Chevron to justice while suffering the effects of the company’s extensive oil contamination.

Though this ruling is in favor of the residents of Ecuador’s Amazon region, those who have worked hard to get this verdict passed acknowledge that it’s not time to celebrate, but rather, it’s time to demand that Chevron pay up. There is more work to be done, and a long road lay ahead.

If you’re in the California Bay Area, please join others on Tue Feb 15th to gather at Chevron’s headquarters and declare “Chevron’s guilty!”

When: Tuesday, February 15th 11:30am
6001 Bollinger Canyon Road
San Ramon, CA
Where: You can either meet there or join the brigade at 10:00am as it departs on a bio-diesel bus near Justin Herman Plaza in San Francisco.
Contact: They have limited space on the bus, so if you’d like to join, call Maria at 202-257-8061.