How the Flower Delivery in Egypt Went 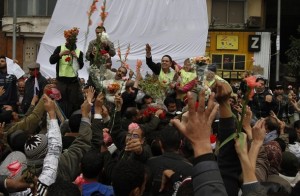 Here’s another update about the uprising in Egypt. This post originally appeared on OpEdNews. Medea Benjamin, Cofounder of Global Exchange and CODEPINK reports back about the flower action in Egypt.

Our first attempt to buy flowers for the demonstrators in Cairo’s Tahrir Square was thwarted by a crazed-looking guy with a gun in one hand and a homemade spear in another (pruning shears taped to a broomstick, to be exact). Three of us, all Americans, were in a taxi driving to the flower market when this fellow stopped our car at gunpoint. His hand on the trigger, he forced us to pull over. Soon we were surrounded by a dozen pro-Mubarak thugs who started yelling in Arabic and broken English that foreigners like us were causing all the trouble in Egypt.

They said they were policemen but none was wearing a uniform. They seized our passports and then four of these characters squeezed into our taxi to “take us to government headquarters.” Frantic, we started calling everyone we knew–local lawyers and activists, friends back home, the U.S. Embassy.

Soon the car stopped at an intersection manned by about ten soldiers. The officer in charge peered into the car and asked us where we were from. “Americans,” he smiled with approval. “I love America.” He started chatting about his training in Ft. Eustis, Virginia, while we sat terrified. To our amazement, he ordered our kidnappers to get out of our taxi, return our passports and let us go. We sped off, not looking back. Our poor taxi driver was shaking. “No flowers,” he said. “Hotel.”

Back at the hotel, we discussed our options. We were thankful not to be in some dark interrogation room being beaten to a pulp, but we still wanted to get the flowers. Folks back home had donated money for us to support the activists, and these people were putting their lives at risk to overthrow a dictator supported by our taxdollars. We could donate blankets, food and medicines through Egyptian groups, but we had to get the flowers ourselves.

We decided that the blonds, Billy Kelly and I, would stay behind and we’d send Tighe Barry and Rob Mosrie, who blend in more. Instead of taking a taxi, they’d go by metro. If stopped, they would say they were buying flowers for a friend’s funeral.

Miraculously, they returned two hours later with a truckload of flowers. Praying that no thugs would beat us up along the way, we piled the flowers in our arms, grabbed our “Solidarity with Egyptian People” banner, and headed toward the square.

People along the street started clapping, smiling, giving us the thumbs up. “Free, free Egypt,” we shouted, as we were swept into the square by a sea of people. They were hugging us, kissing us, snapping our photos–and crushing us and the flowers. Thankfully, we were rescued from the chaos by a group of men who linked arms to form a ring around us. Steering us toward the main stage, they hoisted us onto the railing so that people could see us. We began throwing roses, carnations, gladiolas and marigolds into the cheering crowd who yelled out, in Arabic, “The People, United, Will Never Be Defeated.”

It was exhilarating. What a privilege to feel connected to this joyous mass of humanity that was charting a new course for the entire Middle East. I was in awe of their bravery, their devotion, their love for their country and each other. I looked down and saw a teenager who had ripped open his shirt to proudly show us his chest full of bandages from the street battles. “You are my family,” he shouted, as he jumped up and down, crying and blowing kisses our way. “I love you.”

All of a sudden, there was a commotion next to us. A military man was making his way to the stage. It was General Hassan El-Rawani, the head of the army’s central command, coming to speak to the masses. Someone handed him a white gladiola. He took it awkwardly, looked over at us and smiled. Then he addressed the crowd.

The military has been in an untenable position and this was a particularly tense day. The commanders had promised they would not attack peaceful protesters, but the government was fed up with the protesters camping out in the city’s main plaza. Today was Saturday, day 12 of the uprising. The army had orders to clear the square by Sunday so that life in Cairo could “get back to normal.” Everyone was worried about what the army would do. The crowd became silent as the General spoke.

He urged the people to leave the square peacefully. He told them they had won, that a new government had already been appointed. It was time to go home.

He also warned the people not to be manipulated by outside forces who were pushing them to keep up the protests. Like the thugs who carjacked us at gunpoint earlier in the day, pro-Mubarak forces have been putting forth this line that the protests are instigated by foreign forces–from Iran and Hamas to America and Israel–who want to create instability in Egypt.

One of the young pro-democracy organizers looked at us while the General was speaking and laughed. “It’s crazy how they try to blame this purely Egyptian uprising on foreigners,” he said. “Perhaps they’ll try to say that these flowers are part of some American plot to incite the masses.”

Meanwhile, the General was still asking the protesters to leave the square. They were respectful, but stood their ground. “We won’t go till Mubarak goes,” they chanted back at him.

For more updates about Egypt, check back here on our People to People blog.