In the world of organizing against Big Oil, victories often seem far too rare. Thus, when they do occur, we must mark them, celebrate them, and ensure that they stick.

Chevron announced on Friday that it will withdraw from all of its coal operations by the end of 2011.

This is a crucial victory.

We began exposing Chevron’s dirty coal secret in 2009 in our first True Cost of Chevron: An Alternative Annual Report.

We then reached out to those communities on the front lines of Chevron’s current and planned coal operations, who told their own stories in our 2010 Alternative Annual Report.

Brad Mohrmann of Powder River Basin Sierra Club in Wyoming warned of Chevron’s plans to develop the first new coal mine in the Powder River Basin area in at least a decade. The mine would sit along the Tongue River, an area of both environmental and cultural importance to the Northern Cheyenne Native American community.

Chevron already operates the giant Kemmerer Coal Mine in Wyoming, named one of the most dangerous mines in the nation by Congressman George Miller. This mine was highlighted in our “Thank you, Chevron” Ad campaign by Underground Ads (pictured below.) 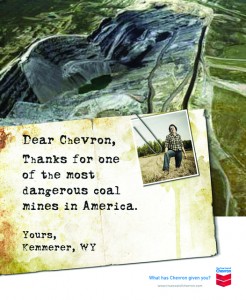 Elouise Brown of Dooda Desert Rock in New Mexico wrote of Chevron’s McKinley Mine near Window Rock, 60% of which sits on Navajo land. After 40 years of constant production, the mine is now just about tapped out and concerns now abound as to how the land will be made safe from the deadly contaminants that have been polluting the community for decades.

We made Chevron’s coal operations a central part of our messaging to the press, the public, activists, advocates, policy makers, and Chevron’s shareholders, its board members, and its executives last year, including at Chevron’s Annual Shareholder Meeting.

Together, we demanded that Chevron drop its dirty coal operations – and it did.

Contact Chevron. Thank the company for declaring its plans to sell its coal operations by the end of the year, tell them you’ll be watching to make sure that this pledge is fullfilled, and that the company should now spread this environmental and social commitment to all of its operations.

Contact the groups fighting Chevron’s coal operations in their own communities and offer your help and support (see links above).

Get Ready! The 2011 Alternative Annual Report is in the works as are plans for Chevron’s 2011 Annual Shareholder Meeting.

Stay connected and learn more about how you can contribute in the weeks to come. Here are a few ways to connect: