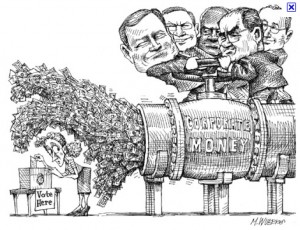 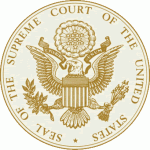 If the Supreme Court had never granted “personhood” rights to corporations, would they still be trammeling the rights of citizens and riding roughshod over communities and nature?  Would we have democracy?

By deciding 5-4 in the Citizens United case, the US Supreme Court expanded corporations’ ability to spend money to influence our elections, and reignited the controversy over corporate personhood. A bevy of campaigns have emerged to challenge it, through litigation or via a Constitutional amendment.

Abolishing corporate personhood is necessary, but our entire system of law is engineered to keep decision making out of the hands of the people.  The unelected Supreme Court, which created corporate monsterhood, would still exist and wealthy interests would continue to shape that judiciary and the debates before it. The Commerce and Contracts clause of the Constitution would continue to place corporate interests over citizens’ rights. The legislature would still be influenced more by Fortune 500 powerbrokers than voters.  State laws that “preempt” communities from making decisions about their local welfare in favor of corporate interests would still be in effect, and regulatory laws would still be written largely by the industries to be regulated.

Perhaps corporations are not even the real problem. The corporation is just the current tool for exploitation: once upon a time Lords and Barons ruled. After jettisoning them in the Revolution, the Constitution guaranteed the slave system.  And in the same breath that law ended human property, the courts made property (corporations) “persons” as a vehicle for the wealthy to continue to maintain power over the many.

Changing the status quo and creating a living democracy will take grassroots organizing.  Even if we start with abolishing corporate personhood, how will we get there?  Past people’s movements for rights suggest we cannot merely ask for change from those who hold the reigns. The Declaration of Independence says that our rights are inalienable, we’re born with them—they do not come from law. We must not relinquish our rights, but exercise them in the face of unjust laws—what some call civil disobedience. Susan B. Anthony cast her ballot and went to jail. The underground railroad ignored the slave laws, and the lunch counter sit-ins of the civil rights struggle remains a powerful symbol of a movement for change. Today’s movement for the inherent rights of people and nature and against corporate power is no different.

At the forefront of this movement stand communities of people confronted by corporate GMOs, water theft, mountaintop removal, and on and on.  They find that it is the law itself that enables corporations to determine their destiny.

GX’s Community Rights program, in partnership with the Community Environmental Legal Defense Fund (CELDF), works with California citizens in a growing number of communities to challenge unjust law through local lawmaking.  These local ordinances strip corporations of their legal privileges and assert the rights of people to make governing decisions.

Concerned about water in her pristine mountain community, Angelina Cook of Mount Shasta, CA is one of those leading the charge for rights in partnership with Global Exchange. “Our ordinance is designed to reverse the dangerous momentum of business as usual by placing citizen rights ahead of corporate interests.  Our ordinance will prohibit corporate cloud seeding and ground water extraction for resale within city limits.  In addition to preventing further degradation, it will transform our existing submissive private-public dynamic.”  The citizens’ group formed to pass the ordinance has spent the winter knocking on neighbors’ doors in freezing temperatures to talk about rights, and to gather the petition signatures needed to put the ordinance on the ballot this year. 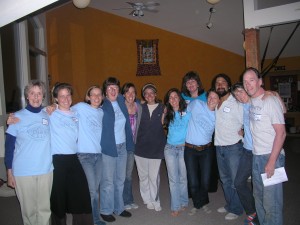 Citizens in Mt. Shasta are organizing to assert their community’s rights!

Meanwhile, the 125+ communities who have passed these ordinances in others states have begun to take this work to the next level—organizing to create new state constitutions based on the legitimate rights of people, while also stripping unjust laws protecting corporate privilege; and from there, national reform. What will those solutions look like? That is for We the People to decide.